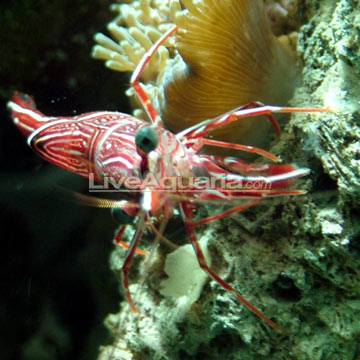 The Camel Shrimp is also known as the Hinge-beak Shrimp, Dancing Shrimp, or Candy Shrimp. It is distinguished by a moveable rostrum (beak) that is usually angled upwards. The Camel Shrimp has a variable pattern of red and white stripes on its body. The males of its species tend to have larger chelipeds (claws) than the females.

It prefers to congregate with other shrimp of its kind in rock crevasses, under overhangs, or in the coral rubble. It especially needs hiding places when it is molting. It usually tolerates other shrimp, but may nip at colonial anemones, disc anemones, and soft leather corals. It generally leaves bubble coral and stinging anemones alone.

Write a Testimonial | Ask Customer Service
Amber Harper Exeter , RI
A delightful creature. I just added one to my tank and it hangs around the bulb anemone and cleans up after it. A great shrimp to have.
Matthew S Rochester , MN
Once they were placed in the tank. They hid for about not even an hour and went right to work. Eating and filter the substrate and anything else that fish left behind. Just great inverts for a reef tank.
1-2 of 2 testimonials