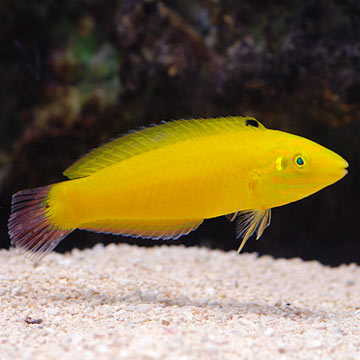 The Yellow Wrasse, also known as the Golden Rainbowfish, Golden Wrasse, Yellow Coris, or Canary Wrasse is a vibrantly-colored wrasse sure to inject exceptional visual interest and activity to any marine aquarium. The Yellow Wrasse is a popular wrasse among hobbyists of all skill levels thanks to its hardiness and relatively compact size. Interestingly, juvenile and young female Yellow Wrasse will have multiple black spots on their fins while mature adults will only have one spot.

The natural range of the Yellow Wrasse is concentrated in the Eastern Indian Ocean, extending into the Western Pacific Ocean including the Solomon Islands and north to Southern Japan and as south to Rowley Shoals and the Australian coast of New South Wales. The Yellow Wrasse is a reef-associated species, typically found at the reef edge in sand and rubble zones.

In the home aquarium, the diet of the Yellow Wrasse should consist of a diverse variety of food items including vitamin-enriched frozen mysis shrimp, vitamin-enriched frozen brine shrimp, and other meaty foods along with high-quality marine flakes and marine pellet foods. The Yellow Wrasse will benefit from frequent small feedings throughout the day.

Write a Testimonial | Ask Customer Service
David S Charleston , SC
I've had one of these cool guys over a year, and it is wonderful. Not very difficult to keep, and mine's in a reef tank. Very hardy and active.
Steve A St. Petersburg , FL
The Yellow Wrasse I have has been very easy going. He does not bother the other fish or invertebrates, and will eat just about any food offered.
Matt Charlotte , NC
oops! i did not heed the advice of Live-aquaria and quarantine corals before putting them in my show tank. The result: a reef tank overrun by flat worms. I purchased a yellow wrasse, hoping to contain the problem naturally. This little guy rid the tank of the flatworms in just a week. Awesome addition to any tank, especially for those of us that learn the hard way.
Louis C Fanwood , NJ
Once again I received a beautiful specimen from DFS. This little guy has quickly becoome a tank favorite. I have a 72 bow with SPS, LPS, Mushrooms, Zoos, Shrimp, etc. He hasn't touched any of the corals or bothered any of his tank mates. Great color and great personality. Thanks
Andy C Wausau , WI
This ia beautiful fish, very peaceful and active. The only limitation I've found with mine so far is that he stays under the sand for most of the day/night and is only out about 6-8 hours. Initially I never saw him because he didn't "wake up" until after I'd left for work, but he's slowly adjusting to my light schedule and is usually up for the morning feeding now. He's back "in bed" before I'm home for work so only gets one feeding per day, but I'm hoping he'll continue to adjust.
Jeff D Arlington , TX
Got this for a splash of yellow in my tank and it has quickly become one of my favorites. Great personality, eats just about anything and is growing fast. Quickly made friends with my Black Cap, Flame Angel and Anthias. Great fish and definitely recommend getting one from Live Aquaria.
1-6 of 6 testimonials