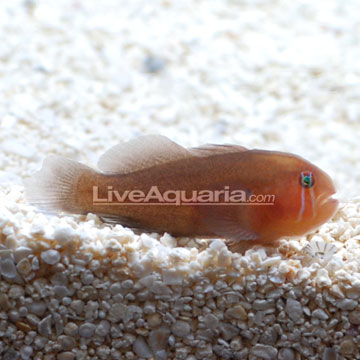 The Brown Clown Goby is common within the reefs of the Indo Pacific, found usually among soft and hard coral colonies. They are a small stocky shaped fish with a very large head for their size. There are many different color variations, and their body color can range from pale brown to jet black. Their distinguishing feature from other clown gobies is the five blue stipes on their head. They are a peaceful fish that makes a wonderful addition to a reef aquarium containing colonies of polyp corals, as they enjoy swimming and hiding amongst the polyps. However, they may nip at the polyps of SPS corals.

They require a 10 gallon or larger aquarium. They will rarely become aggressive towards other fish, but will fight among their own kind in smaller tanks. If the aquarium is large enough, a group may be simultaneously introduced. If branching coral is present, the group will form mated pairs. It is best if the Clown Gobies are kept with other docile species.

Write a Testimonial | Ask Customer Service
Christine B Burlington , WV
We bought 5 clown gobies (2 were brown) and introduced them at the same time. Did well in a small 10 gal. quarantine tank together. Since added to a 75 gal. tank, we might catch a glimpse of them (brown) once a week as they have set up home behind the rocks. They don't come out for feeding time. The green goby only shows up occasionally at feeding time and after lights are out. The yellow and black gobies are always out front perched on corals or the tank walls and occasionally swimming. They are very eager feeders.
1-1 of 1 testimonials