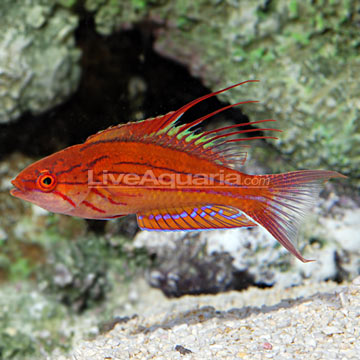 The Filamented Flasher Wrasse, also known as the Whip-fin Fairy Wrasse, originates from the waters of the Indo-Pacific. The Filamented Flasher Wrasse is primarily red in color with a white underside. The fins are yellow with blue markings, and the dorsal fin is elongated. The color of the female is subdued when comparing it to the brilliance of the male. The male during courting will change colors very rapidly giving it its common name. Colors may vary depending on the fish's mood.

The Filamented Flasher Wrasse is a very peaceful, active fish that will bring both color and activity to a fish-only or reef aquarium of 55 gallons or larger. They will not bother any corals or invertebrates making them a perfect fish for the reef aquarium. A single male can be kept with a group of females that is introduced prior to or at the same time as the male. These wrasses like to jump, so a tight fitting canopy is recommended.

When first introduced into the aquarium, live saltwater feeder shrimp should be used to entice this fish to eat. Meals should consist of a variety of feeder shrimp, flaked foods, and marine meats.

Write a Testimonial | Ask Customer Service
Candy V. Washburn , WI
This is a beautiful, active, and healthy fish. Mine gets a little shy when a larger fish is first introduced to the aquarium, but this hasn't lasted more than a day at a stretch.
Almedia Welch-Jones Dorchester , MA
This fish is absolutely gorgeous. He is not shy at all, my other fish welcomed him very well. I was expecting a small one, but it came in full grown and healthy. He ate right away. Thank you live aquaria!
Andrew Carter Bettendorf , IA
Man, what a joy it is to have this little guy swimming around my tank! He's very active and hardy-- not timid or shy at all. A must have for a community reef tank! One of God's most beautiful creations!
Eric B Virgina Beach , VA
A colorful, fun to watch swimmer, especially at feeding time. A little shy around more aggressive fish, but fast enough to stay away from trouble. One problem with this species is that they like to jump. I lost one of these beauties when she jumped through a 1" gap between the hood and equipment.
Eric B Virgina Beach , VA
Shy but beautiful additions to my tank. It took 10 days after arrival for mine to come out at all, but now they are frequently seen darting in and out of the rockwork and extending their dorsal fins, especially at feeding time. Mine are both females: One is bright red, the other a dull pink, both with purple tails. I can't wait to add a male to the mix...
Kimberly Wisconsin Rapids , WI
My fish was prettier than the picture even! In my 150 gal. tall reef, he never even came close to jumping. My tank got sick and he had to go to the 29 gal. QT. I left the cover off for 15 minutes to play with the kids. I thought it was odd that I couldn't see him-after looking for 10 mins. in an almost bare tank and thinking he was doing a good job at hiding (the QT has only a couple of plastic trees and a pvc T-connector) I found him laying on the floor behind the tank! DON'T LEAVE THE COVER OFF AND WALK AWAY!!!
1-6 of 6 testimonials