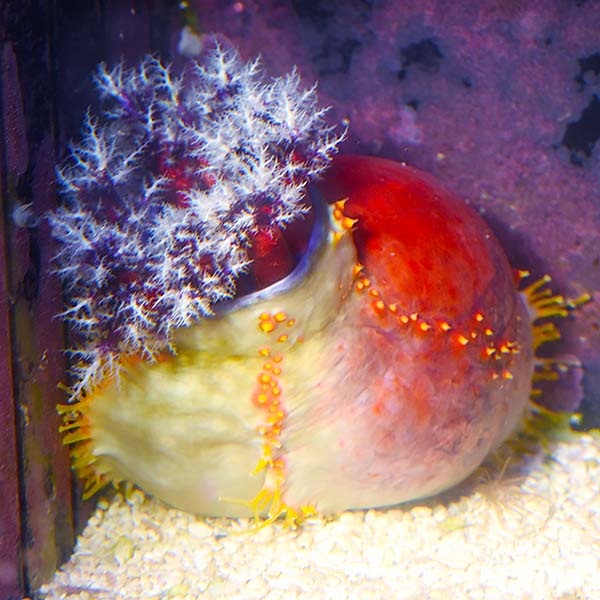 The body and tentacles of the Sea Apple, or Philippine Sea Apple, can be a vareity of colors, but it always has yellow feet. The oral region is usually blue to violet, hence the common name Violet Sea Apple or Violet Sea Urchin.

It prefers an established reef aquarium with room to move about, and large amounts of live rock from which it receives a majority of its food. Once it finds a favorable location, usually in a high current area, the Sea Apple will generally stay there. Protect all intakes on pumps and power heads, to eliminate any possibility of being sucked in. It is very sensitive to high levels of copper-based medications. Sudden changes in pH or salinity can cause it to shed its oral tentacles.

Do not house these cucumbers in an aquarium that contains any fish that may pick on its tentacles. Generally, any fish that is prone to pick on feather dusters, will pick on the tentacles of the Indonesian Sea Apple. These fish include; Butterflyfish, Large Angels, and any species that is listed not safe with invertebrates.

When feeding, it will extend its oral tentacles into the current to filter out food. As the food is trapped, it will then draw its entire tentacle into its mouth. In the aquarium, it will need to be fed a diet of phytoplankton - frozen, liquid, or dried - on a daily basis.


Sea apples have an amazing ability to inflate and deflate on demand. They are fairly hardy and need to be fed brine shrimp on a daily basis. Simply squirt the shrimp directly into their feathery tentacles. Sea Apples are a good addition to the community fish tank. Just beware of the females because about once a year the female will lay eggs, which will kill your fish if they eat them. Just follow the eggs with a 1/4 water change.
Laurie O VA
Sea apples are actually pretty hardy. I have one in a community reef tank and he is thriving beautifully. I feed him Cyclop-eeze and phytoplex...He is a very good eater. By day he wedges between live rock and a large hairy mushroom. At night he has a favorite corner in the front of the tank. He doesn't disturb his tankmates, and they respectfully do not disturb him. He is really amazing to watch. I consider myself an experienced reef keeper, and would not recommend this to a beginner. It takes constant water monitoring and a close watchful eye to make sure he is happy. Well worth the extra effort for such a beautiful animal.
1-2 of 2 testimonials