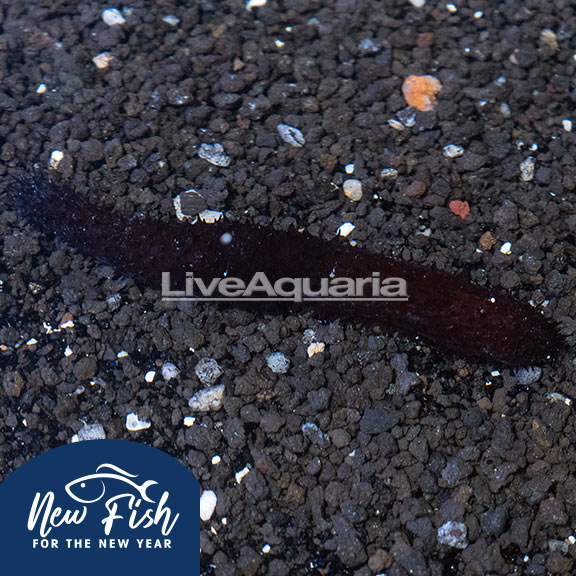 The Greenfish Sea Cucumber Stichopus chloronotus is a species of echinoderm that feeds on detritus. It is known by many other names: Spiky Sea Cucumber, Green Sea Cucumber, and Black Knobby Sea Cucumber and is found in sandy areas on reef edges in the Indo-Pacific region. They display a dark green to black color with rows of red or orange papillae along its sides. Having soft bodies, they also have small bones that make up an exoskeleton resembling latticework. Belonging to the Stichopodidae family, this sea cucumber has about twenty flat tentacles on its mouth.

Sand sifters, the Greenfish Sea Cucumber should be in an aquarium with plenty of sand. Generally, for every three inches of sea cucumber there should be 20 gallons of water.

Greenfish Sea Cucumbers will benefit from the substrate being stirred regularly releasing bacteria and detritus into the water. Supplement their diet with liquid or dried phytoplankton and zoo plankton.

They can produce both sexually and asexually. Sexual reproduction is accomplished by broadcast spawning. During asexual reproduction, they undergo transverse fission, where two new individuals are formed and each of them regenerates missing parts. Approximate Purchase Size: 3” to 8”