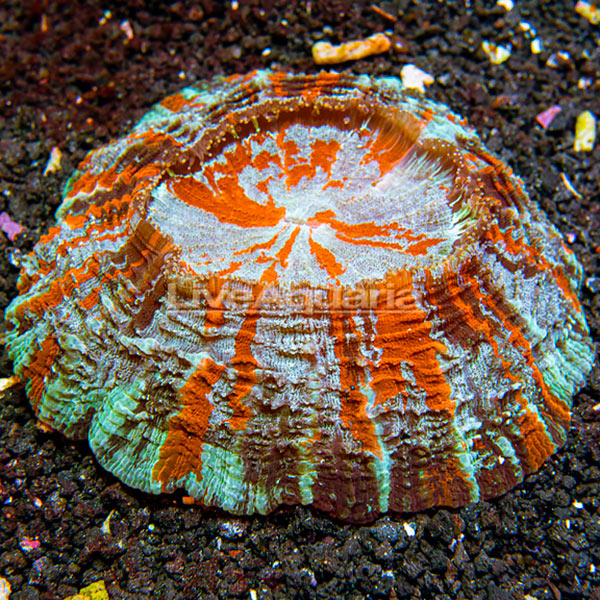 Live corals are important contributors to the structure of a saltwater reef in nature as well as in reef aquariums. The Acanthophyllia genus only has one species, which is deshayesiana. Deshayesiana is in itself a newer species.

Meat Corals (Acanthophyllia deshayesiana) are LPS Hard Corals that are slow growing and are also known as Donut Coral or Button Coral due to the fact that they are a rounded meaty coral with a crater or depression in the center that is in contrast to its raised sides. Meat corals can inflate to twice their size during the day and are considered semi-aggressive as they have the ability to sting (usually doing so when something or someone touches their center area). If you keep more than one, there is no problem placing them near each other as long as each of them has enough room to inflate. The Meat Coral LiveAquaria® offers are highly colored specimens, containing hues of red, green, purple, and orange and display these colors in unstructured stripes or striations.

In their natural habitat, Meat Corals can be found in areas with gentle water currents and attached to soft substrates or rocks under overhangs. For continued good health, these hard corals will require the addition of supplemental calcium, strontium, and other trace elements to the water. The reef tank should be one with a low water flow and moderate lighting. Be sure to place these corals on a level substrate, as the weight of the flesh can pull against the skeleton and cause tears if left unbalanced.

The Meat Coral will satisfy the majority of its nutritional requirements by means of photosynthetic, symbiotic zooxanthellae algae hosted within their bodies and will benefit from occasional broadcast feeding in the form of micro-plankton or foods designed for corals in flake or liquid form.

Hobbyists who use our LiveAquaria® Professional Reef Salt have the added benefit of knowing marine species shipped from our Wisconsin Facility share the same water parameters and will acclimate and transition to your home aquarium with less stress to set the foundation for longer term success.