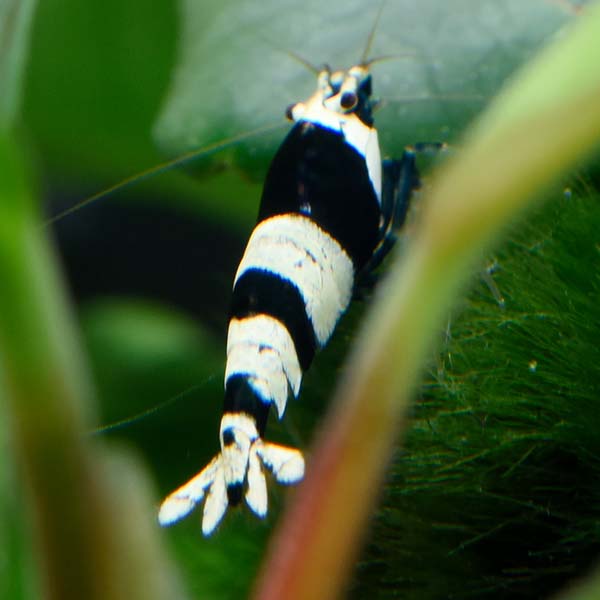 Native to the swamps and streams of Japan and Asia, Caridina shrimp species require an established freshwater aquarium with plenty of hiding places, sufficient amounts of algae on which to feed, and a mature substrate. For the best care, house the Black King Kong Crystal Shrimp with small peaceful fish that will not pose the threat of making a meal of them. Black King Kong Crystal Shrimp prefer water that is slightly on the acidic side. Indian almond leaves and driftwood will help to naturally soften the aquarium water by releasing tannins and provide a surface for bio film to grow on which the shrimp also include in their diets.

If there is a male and female Black King Kong Crystal Shrimp in your aquarium, they will most likely breed and the female will carry the eggs under her tail. The newly born shrimp will look like miniature adult shrimp and will eat the same thing as the adults. If breeding the Black King Kong Crystal Shrimp, it is important to house the hatchlings in a separate aquarium by themselves since most other tank mates will consume the young shrimp.

The Black King Kong Crystal Shrimp is an omnivore that consumes algae, detritus and left-over food. If insufficient food is present, supplement with a quality flake for or pellet food designed for shrimp.