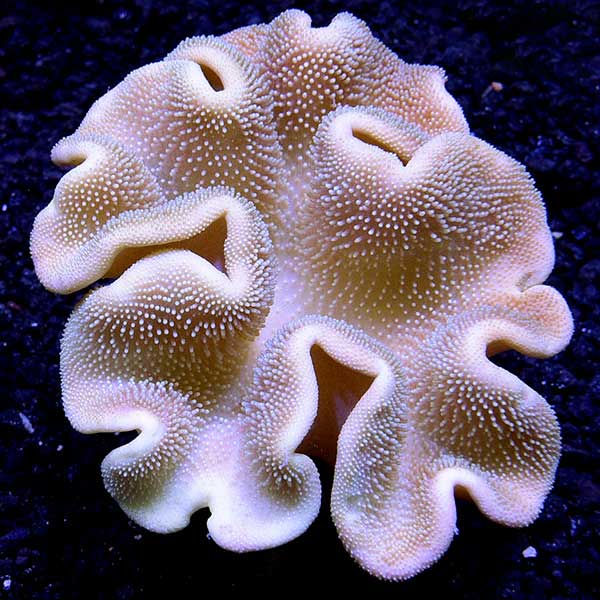 The Toadstool Mushroom Leather Coral is referred to as Sarcophyton Coral, Mushroom, Leather, or Trough Corals. They are found in various shades of brown, tan or green, with white or gold polyps. It is difficult to identify many species because they all have the similar appearance of a mushroom or toadstool, each with a distinct stalk and capitulum (cap). As they grow older, they develop a folded appearance.

The Toadstool Mushroom Leather Corals are relatively peaceful, but adequate space should be provided between them and other corals in the reef aquarium. Some can produce toxins which are harmful to other reef inhabitants. The brown Sarcophyton Leather Corals from Idonesia and Tonga are easy to maintain in the reef aquarium and make an excellent coral for the beginning through expert reef aquarist. Toadstool Mushroom Leather Corals require medium to high lighting combined with medium to strong water movement. For continued good health, they will also require the addition of iodine, strontium, and other trace elements to the water.

The Maricultured Coral is mounted to a natural “rock like” plug that can be placed easily and securely in or between rockwork in the reef aquarium.

My wife and I started our reef tank approximately six months ago. Like most beginners, we had to learn the ropes about which types of coral would do well for us. Sarcophyton (Toadstool Mushroom Leather Coral) takes the grand prize in our opinion. Since buying our first umbrella coral, we have had success with multiple species of Sarcophyton, and we have successfully propagated one animal so far. If you are looking for first corals, hardy corals, or just fun corals, Sarcophyton is the pick!

Brent Larson Chester , SC
I love it. It is very hardy and has provided another resting place for my Gobies. I would like to thank Live-Aquaria for a beautiful addition to my reef. This is a very nice coral to add to a reef tank.
1-2 of 2 testimonials