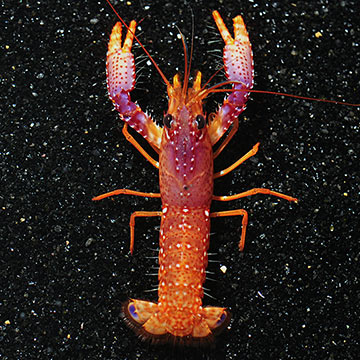 The Daum's Reef Lobster has elongated, flat appendages that are used mostly for show. Its body is a vivid purple and orange color with red spotting over it.

While it prefers to roam at night, it will usually ignore sleeping Wrasses, but sometimes will bother invertebrates. It will need a good hiding place after it molts while it waits for its new exoskeleton to harden. The cave can be designed so that it can be seen during the day, but it will spend most of the daylight hours in its cave hiding from the light.

The Daum's Reef Lobster prefers an aquarium with live rock so that it can roam over the surface looking for food. It is extremely difficult to breed in captivity. To see its distinguishing characteristics which help differentiate it from its mate, look under its abdomen. It is sensitive to high levels of copper-based medications.

Write a Testimonial | Ask Customer Service
J W Franklin , TN
beautiful lobster, stays small and is almost always hidden in the rocks. Very shy. Problematic for fish. After adding him to the tank, i've lost 3 fish in 2 months...all of the smaller fish.
1-1 of 1 testimonials