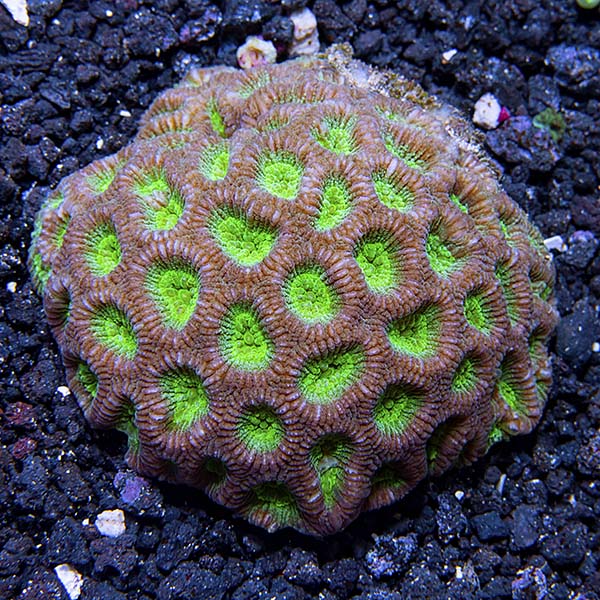 The Montastrea Coral is a fascinating LPS coral found in a variety of color forms and shares a host of common names with Favia corals including Moon, Pineapple, Brain, Closed Brain, Star, Worm, and Honeycomb Coral. Montastrea colonies are typically encrusting or massive in form, taking on a domed or hemispherical appearance. Following the recent update in stony coral taxonomy, members of the genus Montastrea have been reclassified, designating the genus Montastrea exclusively to Caribbean coral species. Former members of the genus Montastrea that originate from Indo-Pacific regions now fall under a variety of genera including Phymastrea. To complicate matters more, the aquarium industry is slow to embrace the updated nomenclature due to the complexities involved in proper identification during collection.

For continued good health, calcium, strontium, iodine, magnesium and trace elements should be added to the water column. The Montastrea Coral satisfies the majority of its nutritional requirements by means of photosynthetic, symbiotic zooxanthellae algae hosted within its body. However, it will benefit from supplemental feedings in the form of micro-plankton or baby brine, fed twice per week in the evening while its tentacles are visible.