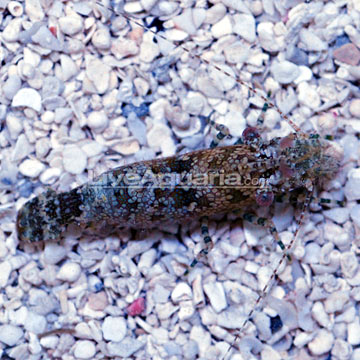 The Saron Shrimp, also known as the Common Marble Shrimp, was first described in scientific literature in 1811. During the day it is brown with green spots. These green spots will have variable amounts of white speckling. The legs have darker brown bands on a brown background with alternating white speckled bands. Tufts of cirri (feathery appendages) are found decorating the back of the males, and their first pair of walking legs are elongated. The Saron Shrimp is nocturnal, and at night, the color of its body turns primarily red, which helps it blend into the shadows of the twilight.

When introduced into an aquarium, the Saron Shrimp will need a dark place in which to hide. After acclimating, it will start to wander about during the daylight. It is usually found in the coral rubble at the base of the reef. It is intolerant of copper or high nitrates, and will require a correct level of iodine in the water for proper molting.

The diet of a Saron Shrimp can include brine shrimp, plankton, flaked food, frozen food, and small pieces of fish.