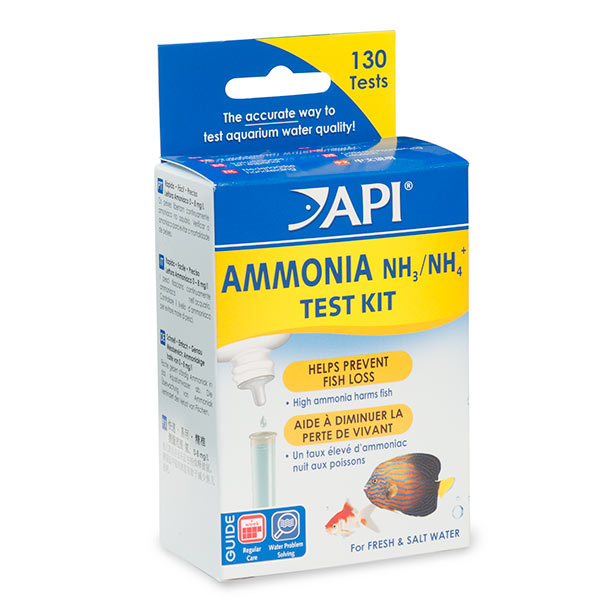 Ammonia Test Kit – Ammonia, constantly released into the aquarium, is the number one killer of tropical fish. Fast, easy and accurate, this test kit measures ammonia levels from 0 to 7 ppm. 130 tests per kit. For fresh/saltwater.

Why Test For Ammonia?
Fish continually release ammonia (NH3) directly into the water through their gills, urine, and solid waste. Uneaten food and other decaying organic matter also add ammonia to the water. A natural mechanism exists that controls ammonia - the biological filter. It is made up of nitrifying bacteria, which live in the substrate and biological filter media. However, as with any natural process, imbalances can occur. Testing for the presence of toxic ammonia is essential, so that once detected, steps can be taken to remove it. Otherwise, ammonia will damage gill membranes, and prevent fish from carrying on normal respiration. High levels of ammonia quickly lead to fish death. Even trace amounts stress fish, suppressing their immune system and thereby increasing the likelihood of disease outbreaks and subsequent fish loss.

What The Test Results Mean
In new freshwater aquariums, the ammonia level may surge to 6 ppm (mg/L) or more, and then fall rapidly as the biological filter becomes established. The ammonia will be converted to nitrite (also toxic), then to nitrate. This process may take several weeks. Use Aquarium Pharmaceuticals Stress Zyme to speed up the development of the biological filter. In an established aquarium or pond, the ammonia level should always remain at 0 ppm (mg/L). The presence of ammonia indicates possible over-feeding, too many fish, or inadequate biological filtration.

The ammonia level is not an indication of the nitrite level; Nitrite is another toxic waste material, which must be tested separately.

Monitoring Ammonia Levels
Regular testing is necessary to make sure the ammonia level is safe. Aquarium and pond water should be tested for ammonia every other day when it is first set up, and once a week after the biological filter has been established (in about 4 to 6 weeks).

Detoxifying Ammonia Using Ammo-Lock
To detoxify ammonia, use Aquarium Pharmaceuticals Ammo-Lock to instantly lock up ammonia. Ammo-Lock does not remove ammonia; it simply converts toxic ammonia to a non-toxic form. Ammonia test kits will still test positive for ammonia, even though it is non-toxic. The biological filter will then consume the non-toxic ammonia, converting it to nitrite and then to nitrate.