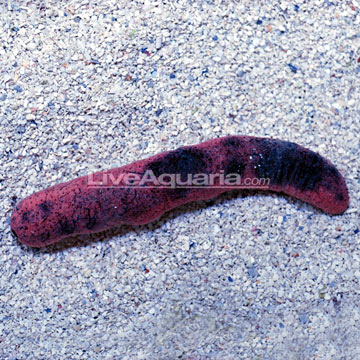 The Sea Cucumber, also known as the Edible Sea Cucumber, was first described by scientists in 1830. It has a long, pink to reddish-brown body, which is usually darker dorsally, often green or black.

It does well in a large aquarium if provided with ample room to roam. Generally, for every 3 inches of sea cucumber there should be 20 gallons of water. It prefers a thick sandy substrate so it can scour through the sand for organic foods. The Sea Cucumber will spend most of its time in the open, though it may carry a thin film of sand over its body.

It is extremely difficult to breed in an aquarium, and has no distinguishing characteristics to help differentiate it from its mate.

Write a Testimonial | Ask Customer Service
Greg F New York , NY
I received 2 amazing pink and black specimens. Both stretch out to nearly 8 inches! I love watching them eat the sand and crawl around on the rocks and up the glass walls of the aquarium. Make sure you drip acclimate them and handle them gently while placing them in your aquarium.
1-1 of 1 testimonials