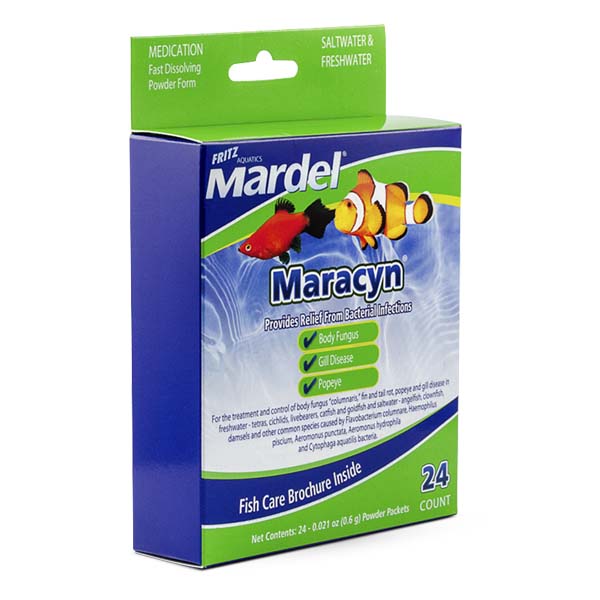 Use 1 packet per 10 gallons of water.

Mardel Maracyn is non-toxic to invertebrates. Follow dosage directions as detailed on the product packaging.

Directions & Dosage
Add the contents of one package per 10 gallons of water and repeat every 24 hours for 5 days. Repeat this 5 day treatment only once if needed.

Important: Treat for 5 days even if visible signs disappear. Maracyn may be used concurrently with Coppersafe, Maracyn Two or Maracyn Oxy. Maracyn will not harm invertebrates. Maracyn may cause excessive foam production in protein skimmers. Stop use of skimmer during treatment if excessive foaming is a concern.

Note: Consult a veterinarian or fish expert for assistance in diagnosis of disease causing organisms and treatment options.

Q. I've used Maracyn/Maracyn Two twice now for two full treatments and it does not appear to be working, can I treat a third time?
A. That would indicate that the source of the problem is not affected by the active ingredients in Maracyn/Maracyn Two. In this situation, rather than repeating an ineffective treatment, using a medication with a completely different active ingredient might be the best solution. So, if Maracyn was not effective, try Maracyn Two and vice versa.

Q. Can I use Mardel Maracyn at same time as Prazipro?
A. Combining treatments will be fine. Just be sure to monitor your ammonia levels while using any treatment.

Q. Can I use Mardel Maracyn and Pimafix simultaneously?
A. Yes, they can be used together. Just always be sure to keep an eye on your ammonia when using any treatment.

Q. How do you recommend using/dosing your beneficial bacteria during a 5-day Maracyn/Maracyn Two regimen?
A. Using the maintenance dose should be adequate, which is 2 oz per 10 gallons.

Q. I think my fish has a bacterial infection, how do I know which product to use, Maracyn or Maracyn Two?
A. If you see specific symptoms mentioned on the packaging or enclosed brochure (body fungus for Maracyn, Fin and Tail Rot/Popeye/Dropsy for Maracyn Two) treat accordingly. However, if the symptoms are less specific and harder to identify, start with Maracyn Two (which is a broader spectrum product) before using Maracyn.