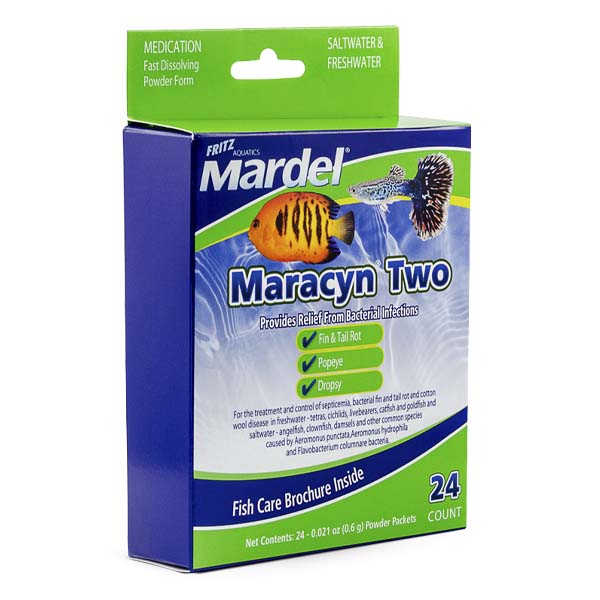 Effectively treat and control difficult-to-detect systemic bacterial infections in freshwater or saltwater aquarium fish. Mardel Maracyn Two is a broad-spectrum antibiotic (minocycline), in a fast-dissolving powder form, effective against gram-negative bacterial diseases as well as secondary and internal infections. During treatment, Mardel Maracyn Two is absorbed by the aquarium fish, raising the concentration of minocycline to a therapeutic level to combat systemic infections from the inside.

Treatment for use with ornamental freshwater and saltwater aquarium fish.

Repeat this five-day treatment once if needed.

Important: Treat for five days even if visible signs disappear. Maracyn Two may be used concurrently with Coppersafe, Maracyn or Maracyn Oxy. Maracyn Two will not harm invertebrates.

Maracyn Two may cause excessive foam production in protein skimmers. Stop use of skimmer during treatment if excessive foaming is a concern.

Concerning the fungus, some bacterial infections look like fungus. If the Maracyn Two treatment does not appear to be clearing it up in the 2nd round you should consider a fungal treatment.

Q. I think my fish has a bacterial infection, how do I know which product to use, Maracyn or Maracyn Two?
A. If you see specific symptoms mentioned on the packaging or enclosed brochure (body fungus for Maracyn, Fin and Tail Rot/Popeye/Dropsy for Maracyn Two) treat accordingly. However, if the symptoms are less specific and harder to identify, start with Maracyn Two (which is a broader spectrum product) before using Maracyn.

Q. I have a 1-gallon betta bowl that I am medicating; if each packet treats 10 gallons (2 packets per 10 gallons for the initial dose of Maracyn Two) how do I treat my betta?
A. Take a small cup, such as a medicine dosing cup that you might get with a cough syrup or allergy medicine (a shot glass will work as well). Fill the cup and pour it into a large container which can be sealed. Fill that same small cup nine more times with the exact same amount of water and add to the large container, for a total of ten measures of water. Dissolve one packet of Maracyn/Maracyn Two into the water in the large container. You can now dose exactly one dose per gallon into your small aquarium by using the same small cup for dosing. Store the mixed solution in the refrigerator. You can also use a gram scale, if available, to measure out the appropriate amount of powder.

Q. How do you recommend using/dosing your beneficial bacteria during a 5-day Maracyn/Maracyn Two regimen?
A. Using the maintenance dose should be adequate, which is 2 oz per 10 gallons.

Q. Is it safe to use in an aquarium that houses ornamental freshwater shrimp? The small variety, cherry shrimp, blue velvet, carbon… etc.. I am having an outbreak of cyanobacteria.
A. Maracyn Two contains Minocycline. It has been tested on reef animals with no ill effect, but there is no data on freshwater invertebrates.

You may want to consider a more natural approach like FritzZyme 360 which will compete against the cyanobacteria (like a probiotic) and help reduce phosphates, nitrates.

Q. I’ve used Maracyn/Maracyn Two twice now for two full treatments and it does not appear to be working, can I treat a third time?
A. That would indicate that the source of the problem is not affected by the active ingredients in Maracyn/Maracyn Two. In this situation, rather than repeating an ineffective treatment, using a medication with a completely different active ingredient might be the best solution. So, if Maracyn was not effective, try Maracyn Two and vice versa.

Q. Can I use Mardel Maracyn and Pimafix simultaneously?
A. Yes, they can be used together. Just always be sure to keep an eye on your ammonia when using any treatment.