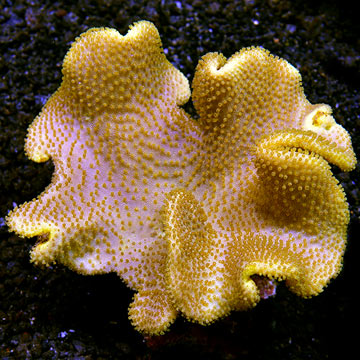 The Leather Coral, Yellow may be referred to as the Sarcophyton elegans Coral. It can be found in shades of yellow, and unlike other Sarcophyton corals, it does not grow an extended stalk. Instead, these corals grow close to the rockwork, and will develop beautiful ruffles around the edges.

It is a relatively peaceful coral but adequate space should be provided between itself and others in the reef aquarium. The Leather Coral requires medium to high lighting combined with moderate to strong water movement. For continued good health, it will also require the addition of strontium, iodine, and other trace elements to the water.

Culturing by the experienced hobbyist is often accomplished by cutting off a portion of the crown and attaching that piece to live rock or placing it in the sandy bottom of the reef aquarium.

Write a Testimonial | Ask Customer Service
Michael Zuccato Stone Harbor , NJ
What a nice addition. It is one of the first corals added to my tank. It is hardy and easy to take care of. When it opens all the way it looks great. I recommend this coral for any tank, especially beginners.
Kimberly Janz Wisconsin Rapids , WI

This coral shaped itself up nicely after being in the aquarium for 24 hours and is absolutely beautiful!
Melanie Rodriguez Naples , FL
I received this specimen a week ago and I must say, I'm so impressed! I ordered the medium size and a healthy piece the size of the palm of my hand arrived. It was on a gorgeous live rock branch encrusted with several colors of corraline algae. Although it was pale yellow the first day, it has progressively turned to a very bright, almost neon yellow shade. It is the star of my reef tank.
William Pantos Victoria , TX
I have a couple of these in different tanks and they have good color. They do prefer solid flow and decent lighting.
1-4 of 4 testimonials