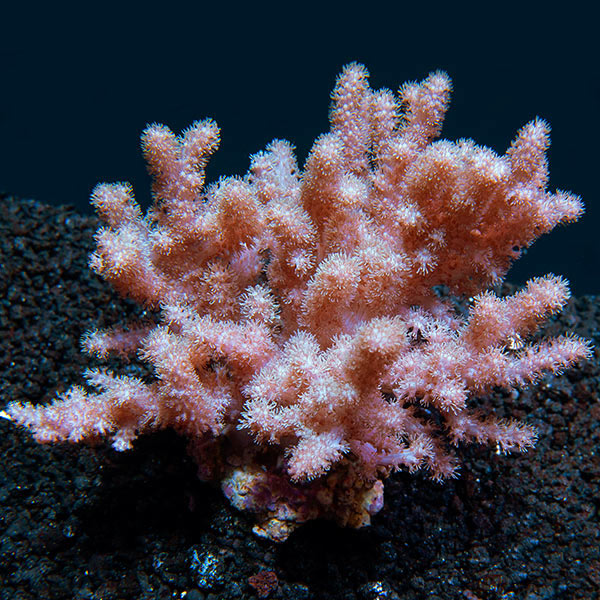 The Cauliflower Colt Coral is also referred to as Colt Coral, Soft Finger Leather Coral, Seaman's Hands Coral, or Blushing Coral. It is very difficult to identify an exact species because there is so much variation of shape and color within each. It is slippery to the touch, encrusting, and usually has small colonies. Members of the Cladiella genus generally have shorter "fingers."

It is an aggressive coral and needs space between others and itself in the reef aquarium. Particular care should be taken to place Sinularia or Sarcophyton corals out of its reach, as the Cauliflower Colt Coral will readily kill these species. It is very easy to maintain and makes an excellent coral for the beginning through expert reef aquarist. It requires medium to high lighting combined with a medium to strong water movement. For continued good health, it will also require the addition of strontium, iodine, and other trace elements to the water.

Culturing by the experienced hobbyist requires snipping off a piece of its tentacle and attaching the cutting to a solid structure such as live rock.

The Maricultured Coral is shipped on a natural "rock like" plug that can be placed easily and securely in or between rockwork in the reef aquarium. Be aware, it will often secrete a mucous coating during shipping to protect itself. To remove this slimy coating, just rinse it vigorously in seawater before placing in the aquarium.

Write a Testimonial | Ask Customer Service
Harry Longo Elizabeth , NJ
I'm told there are two varieties of the common Colt Coral... one type stays rather small while the other gets to be gigantic. The one I have is the latter. He is very easy to care for; he is almost always "in bloom," meaning, he's fully inflated while the lights are on. This fellow was about fist size when purchased and the very next day he fully inflated to be 10 inches high and 10 inches wide. Eight months have gone by and now he's 16 inches high and 16 inches wide. It's true that he stands upright on his long stem much as a willow tree and with good current, he does sway softly in a relaxing rhythm. A very hardy, magnificent coral! The only negative comment I can make is that this guy has outgrown my 20 gal. nano tank in one day; my 29 gal. tank in about three months and my 30 gal. extra high in less than a week. He casts a giant shadow because of his 16 inch wide mantel. This guy belongs in a 70 gal. high tank... to say the least.
1-1 of 1 testimonials