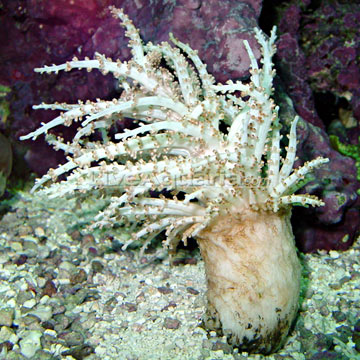 The Christmas Tree Soft Coral is also referred to as the Medusa Coral, Snake Locks Coral, or French Tickler. It is usually a shade of brown, tan, or gray.

It is a peaceful coral but will need space between others and itself in the reef aquarium. The additional space is needed to avoid incidental contact of sweeper tentacles and the fact that it will often increase and decrease in size. It will often close up its tentacles at night, resembling a round or oblong potato and unfold its branches during the day resembling a Christmas Tree with drooping branches. Placement in the sand, gravel, or rubble at the bottom of the reef aquarium where the light levels are lower and with adequate water parameters should help it to thrive. The reef aquarium should have a medium to strong water movement. For continued good health, it will also require the addition of strontium, iodine, and other trace elements to the water.

It does not contain symbiotic algae, so lighting is not a pressing requirement, however, this means the Christmas Tree Coral must be fed. The diet should include live, baby brine shrimp, micro-plankton, and other small foods designed for filter feeding invertebrates, in order to survive in the reef aquarium.