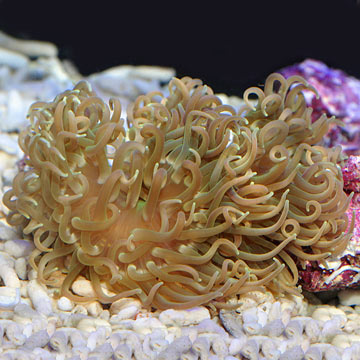 The Long Tentacle Anemone is also referred to as the Corkscrew Anemone, Sand Anemone, Red Base Anemone, and Long Tentacle Red Base Anemone. It has a similar appearance to Heteractis crispa, which has more tentacles and a tougher column. Its oral disc is usually visible and can grow up to 20" in diameter. Its tentacles are spaced further apart than other similar anemones. It is found in various forms and color patterns, but its base is usually orange to red. It is a host to clownfish, usually Amphiprion perideraion and A. clarki.

The Long Tentacle Anemone requires an aquarium with 4 inches of sand or rubble substrate in which it can hide.

The diet should include small pieces of fish or mussel, crustaceans, and frozen foods.

Write a Testimonial | Ask Customer Service
Richard M Baraboo , WI
A very beautiful Anemone. Mine has done very well. After introducing a Saddleback Clown, the Anemone has done even better. The anemone is now roughly 15" to 18". The two have been together for two years. They're in a 72 gallon bowfront. It maybe time to start thinking of getting a larger home for them, and maybe a boyfriend for the Clownfish.
Kyle F Whitehouse , TX
This type of Anemone is absolutely fabulous. It took him an hour or two to finally pick the right spot and get settled in, but now he is wide open with all his tentacles out. My Clownfish also likes to hang out with him too. He is always a sight to see in my 30 gallon tank.
Mark H Lake Havasu City , AZ
Didnt take long for one of my sabae clowns to find it and it loves it:) The color of mine is white with a pikish red tint to it, needless to say it gets a lot of attention when people look at my tank. I was suprised how big it got when it opened up.
1-3 of 3 testimonials