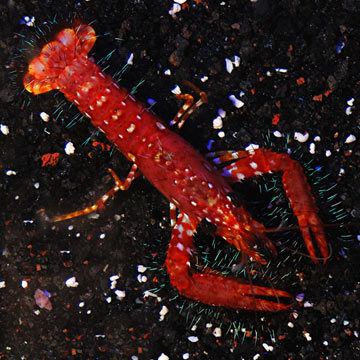 An ideal environment should have a thick gravel bed for burrowing, and rocks for hiding, as well as live rock on which to hunt. After molting, the Reef Lobster will need a secure hiding place, such as a cave, while it waits for its new exoskeleton to harden. The cave can be designed so that the lobster can be seen during the day, but it usually will spend most of the daylight hours hiding from the light. It prefers to scavenge and hunt at night. The Reef Lobster is described as peaceful, and it will ignore sleeping Wrasses or healthy fish within the aquarium. It may harm small fish and invertebrates. All Reef Lobsters are very territorial and aggressive towards each other, so only one specimen, or a mated pair should be kept per tank. It is sensitive to high levels of copper-based medications.

Most of the diet will consist of food it scavenges, but supplementing with iodine-rich foods will help ensure proper molting.