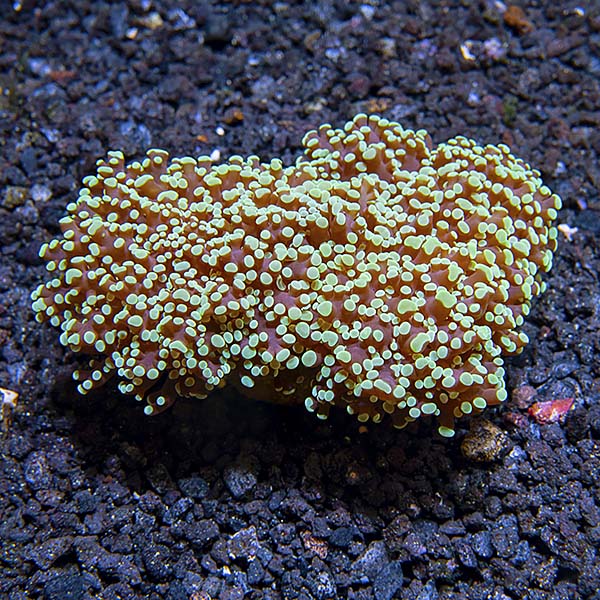 The Frogspawn Coral is a large polyp stony coral (LPS) often referred to as the Wall, Octopus, Grape, or Honey Coral. Its polyps remain visible throughout both the day and night, resembling a mass of fish eggs or frog eggs, hence one of its common names Frogspawn. Its coloration is green or brown to tan in color. With its appearance and coloration it would make a nice addition to any reef aquarium.

During the evenings, its sweeper tentacles can extend up to six inches beyond its base into the reef aquarium surroundings. It will sting other neighboring corals in the reef aquarium, therefore, it is best to leave plenty of room between itself and other types of corals. It is moderately difficult to maintain, but it is a popular coral that will thrive under the proper conditions. It will need to have moderate to heavy lighting combined with moderate water movement within the aquarium. For continued good health, it will also require the addition of calcium, strontium, and other trace elements to the water.

The symbiotic algae zooxanthellae hosted within its body provides the majority of its nutritional requirements from photosynthesis. It will also benefit from additional food in the form of micro-plankton or brine shrimp.

Write a Testimonial | Ask Customer Service
Duane McCloud Stuart , FL
This is an incredibly beautiful and interesting coral. Friends assume it's an anemone when they first see it, but it really is more vibrant. It is aggressive ...place nothing but live rock immediately around it...but unlike a comparably aggressive anemone it can't crawl around the tank! It is particularly interesting to watch it eat shrimp pieces-- the polyps will retract and route the food to the "mouth." Find it a corner area with good water flow, add the normal snow and small meat items, and it will be very happy.
Jovan Cinco Clermont , FL
Wonderful to look at day or night. It seems happy in my 75 g tank. Very proud of it.
1-2 of 2 testimonials