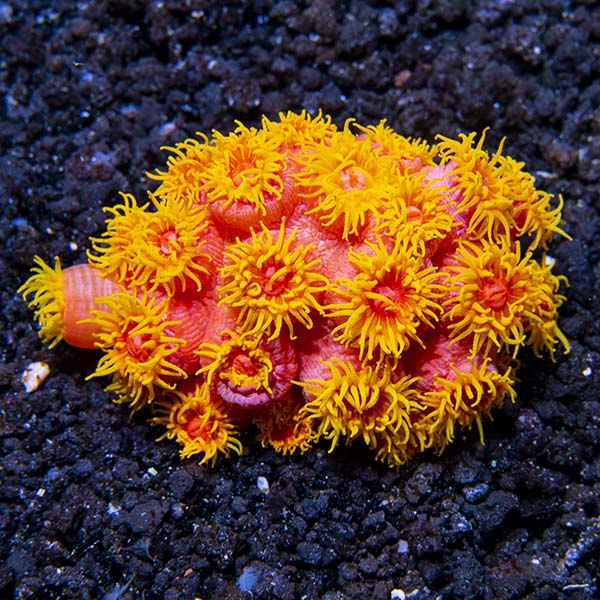 The Tubastrea Orange Tube Coral is a large polyp stony coral, and may be referred to as the Orange Cup Coral. Its genus name, Tubastraea, is derived from the Latin words tubus (tube) and astron (star), describing its skeletal structure which is tubular, with stars at the tip of each tube. The center skeleton is round with the tubes branching off in all directions. In the wild, it is often found on reef ledges or steep reef slopes.

The Orange Tube Coral can be quite fragile and must be handled with extra care. When placing in the aquarium, it must be picked up by its underside. It should have moderate to high water current combined with low lighting levels. It will also benefit from the addition of calcium, strontium, and other trace elements to the water. It is a hardy coral for the reef aquarium, but is classified as moderate because of the special care that it requires.

It is one of the few corals that does not contain a symbiotic algae, so it must be fed vitamin-enriched brine shrimp or micro-plankton from an eye dropper directly to each one of its polyps. It will usually only expand its polyps in the evening or when it is hungry.


I tried this as a first coral in my 180-gallon tank. I found that it is sensitive to low salinity. I thought I lost the entire coral but nature has a way of bringing things back and now I have little ones coming back!

John Owen Polo , IL
This coral is great. I have had this coral for around 2 weeks and it is already budding off and spreading to the adjacent rockwork. It is easy to feed with brine and mysis shrimp. I would highly recommend this coral for anyone wanting to get started in corals or for those who don't have the money to spend on strong lighting.
John Cruz Fall River , MA
I have this coral in my 55 gallon tank. I've had it for 3 weeks now. I currently use B-Ionic Calcium Buffer System #2, as well as DT's Natural Reef Diet (oyster eggs) and DTS Marine Phytoplankton. I found it has taken a big liking to oyster eggs and Marine Phytoplankton. The coral just opens right up everytime I apply these two supplements. It's a very beautiful and healthy coral.
Mike Murphy Fresno , CA
I have two colonies in my 55-gallon tank that are over two years old. It is a very forgiving coral to learn with. Over the years I have accidentally starved part of it and grown it back. Both colonies are now so healthy that I am finding new colonies starting in other parts of the tank. Currently a small group is forming on a power head. I have also "trained" the coral to open at certain times of the day by feeding regular times. Currently they are being fed Formula 1, Prime Reef, or minced shrimp with a turkey baster two to three times a week.
1-4 of 4 testimonials