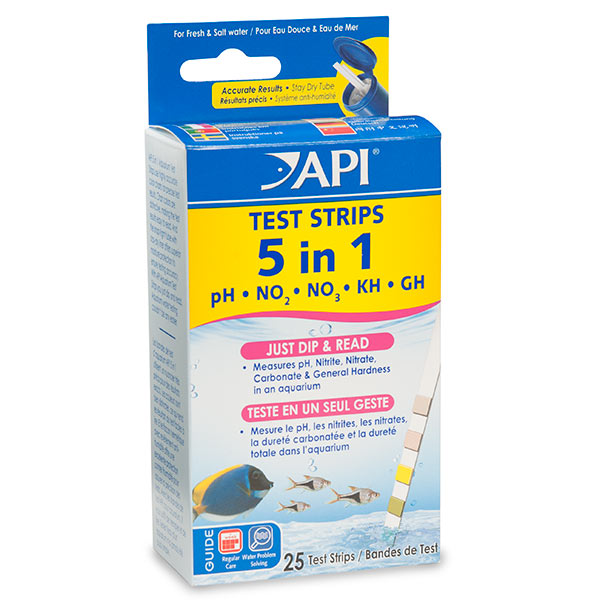 Simplify routine testing to ensure best care of aquarium inhabitants. API 5 in 1 Aquarium Test Strips for fresh and saltwater aquariums provide hobbyists a quick and easy way to test five of the most important measures of aquarium water quality. A single test strip measures aquarium General Hardness (GH), Carbonate Hardness (KH), pH, Nitrite (NO2) and Nitrate (NO3) all at once.

General Information
It is important for aquarists to provide a healthy aquarium by approximating the water conditions of the natural habitats of their fish. This requires routine water testing to make sure conditions are correct for the fish being kept. API 5 in 1 Aquarium Test Strips are the quick and easy way to test 5 of the most important measures of aquarium water quality: General Hardness (GH), Carbonate Hardness (KH), pH, Nitrite (NO2) and Nitrate (NO3). These 5 parameters should be tested weekly, since natural materials in the aquarium, such as fish waste and decaying food as well as water changes and evaporation can cause these levels to shift over time.

What is General Hardness (GH)?
General Hardness is the measure of calcium (Ca2+) and magnesium (Mg2+) ion concentrations dissolved in water. These minerals are present in municipal, well, and bottled spring water. The GH in tap water depends on the source of the water and the treatment processes it has undergone. Hard water (?200 ppm) is high in calcium and magnesium. Soft water (50 to 100 ppm) is low in these minerals.

What the Test Results Mean
The table below is a guide to the desired General Hardness (GH) for certain common tropical fish and live plants.

What is Carbonate Hardness (KH)?
Carbonate hardness (KH), also known as alkalinity is the measure of carbonate (CO32-) and bicarbonate (HC03-) ion concentrations dissolved in water. Carbonate hardness helps stabilize pH in the aquarium. An aquarium with a low KH level (50-100 ppm) will tend to be acidic. Aquariums with very low KH are subject to rapid pH shifts, if not monitored carefully. This causes stressful conditions for fish. An aquarium with a high KH level (?200 ppm) will tend to have a high pH. Even if the KH is correct initially, it can decrease over time as carbonates are used by the biological filter and plants.

What the Test Results Mean
In order to provide the proper environment for your fish and to ensure a stable pH, it is important to monitor the KH in both the aquarium and the tap water. The table below is a guide to the desired KH for certain common tropical fish and live plants.

Increasing KH
KH can be increased by using API Proper pH API Proper pH 6.5, 7.0 and 7.5 are non-carbonate buffers that automatically adjust the pH and stabilize the KH in freshwater.

Why Test pH?
In order for your fish to thrive, it is important to maintain the pH in the aquarium at a level similar to their native habitat. A pH reading of 7.0 is neutral, a pH above 7.0 is alkaline and a pH below 7.0 is acidic. The water in the natural habitat of some species is neutral, while that of other species is either acidic or alkaline. Most freshwater fish will thrive at a pH range of 6.8-7.5. The pH of natural ocean water is between 8.2-8.4, therefore, saltwater fish and invertebrates should be kept in that range.

What the Test Results Mean

Recommended pH Levels
A pH of 6.8-7.2 is ideal when keeping a community aquarium containing a variety of tropical fish. Goldfish should be kept in their own aquarium and prefer a pH of 7.5. Many Amazonian fish like angelfish and neon tetras prefer a pH of 6.5-6.8. Mollies and swordtails thrive at a pH range of 7.2-7.5. Most African Cichlids need an n pH of 8.2 or higher.

To raise or lower pH in a freshwater aquarium, use API pH UP or pH DOWN. API Proper pH 6.5, 7.0 and 7.5 can be used to automatically adjust the pH to the appropriate levels.

Why Test Nitrite & Nitrate?
Nitrite (NO2-) and Nitrate (NO3-) are produced in the aquarium by the biological filter. Beneficial bacteria convert toxic ammonia into nitrite (also toxic) and then convert the nitrite into nitrate. An established aquarium should have 0 ppm nitrite but nitrate will continue to increase over time.

Nitrite: Testing for nitrite is essential so that if it is present, steps can be taken to remove it. Nitrite in the aquarium water interferes with fish respiration and high levels of nitrite quickly lead to fish death. Even a trace amount of nitrite causes fish stress, suppressing the immune system. This increases the likelihood of disease and subsequent death.

Nitrate: The biological filter constantly produces nitrate in an aquarium. A high nitrate level indicates a buildup of fish waste and organic compounds, causing poor water quality and contributing to the likelihood of fish disease. Excessive nitrate also provides a nitrogen source that can stimulate algal blooms (green water). Many aquarists believe that maintaining a low level of nitrate improves the health of fish and invertebrates.

What the Test Results Mean
Nitrite: