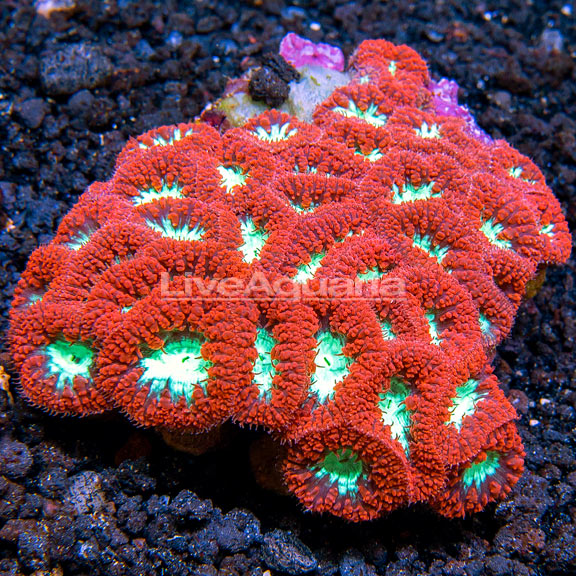 The Big Polyp Blastomussa Coral is also referred to as a Blastomussa Pineapple Coral. It is often confused with other brain corals and some mushroom corals, somtimes being referred to as the Swollen Brain Coral. It is a large polyp stony (LPS) coral and has many round swollen discs, that when open, resemble a mushroom anemone. It is blue, brown, red, green, or a combination of all of these colors.

The Big Polyp Blastomussa Coral does well in an established reef aquarium being a moderately hardy coral. A low water current combined with a moderate light level will make a wonderful home for this species. Generally, it is considered a peaceful coral, not moving in on tank mates that are located in close proximity to it. It benefits from the addition of calcium, strontium, and other trace elements to the water.

Its body contains the symbiotic algae zooxanthellae from which it receives the majority of its nutritional requirements through photosynthesis. It does not require additional food to maintain its health in the reef aquarium, but it will feed on micro-plankton or foods designed for filter feeding invertebrates.