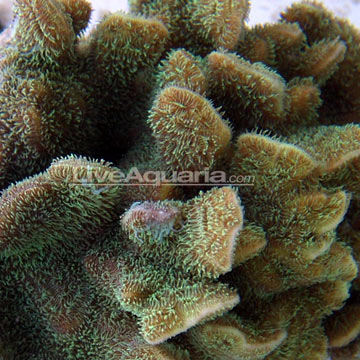 The Pavona Coral is a small polyp stony (SPS) coral, and is referred to as the Cactus, Potato Chip, or Lettuce Coral. Its common name "cactus," comes from its appearance which resembles that of a cactus. These corals form thin plates as branches that are covered with polyps giving it a fuzzy appearance. Its color varies from shades of light and dark brown to green with cream or white margins. They have a fluorescent glow that can be seen beneath the polyps, giving these corals an interesting look.

Usually SPS corals tend to be more difficult to care for when compared to LPS corals. Once established, though, the Pavona Coral is fairly hardy but requires a moderate to high light level and strong random currents within the aquarium. Calcium, strontium, and other trace elements should be added to the water for its continued good health.

It will benefit from additional food in the form of micro-plankton or brine shrimp fed in the evening when its tentacles are visible.