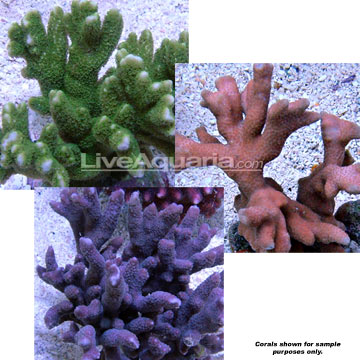 The Branched Montipora Coral is a small polyp stony (SPS) coral often referred to as Velvet Branch, or Velvet Finger Coral. This branching coral comes in a variety of colors and is a fast growing species. The form that the coral takes in its growth will be highly variable depending on the lighting, water movement and placement within the aquarium. However, it will typically maintain its branched form in most aquariums. When the polyps are expanded, the coral has a very fuzzy appearance, with smooth growth tips adding to its overall appeal.

The Branched Montipora Coral is peaceful and can be placed in close proximity to other similar peaceful corals in the reef aquarium. It is a relatively hardy coral and requires just a moderate amount of care when housed in a mature reef aquarium. It will require medium to high lighting combined with a medium water movement within the aquarium. For continued good health, it will also require the addition of calcium, strontium, and other trace elements to the water.

The Branched Montipora Coral receives most of its nutrition through photosynthesis. It will also benefit from additional food offered in the form of liquid or dried zooplankton.


Once again, another awesome order! This coral also had its polyps out in five minutes. I don't think I've ever had a coral do so well so quickly! I'd recommend this one for everyone who needs that "something special" for his or her tank.
1-1 of 1 testimonials