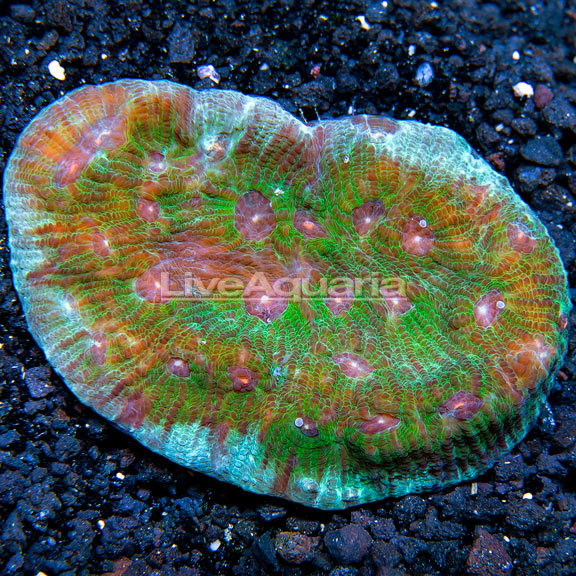 The Mycedium Coral is a large polyp stony (LPS) coral, and is often referred to as the Green Eyed Cup, Plate, or Peacock Coral. The most commonly imported species is Mycedium elephantotus, dubbed "Elephant Nose," from the Fiji Islands. A blue to green base color with bright green polyps is the standard color variety available. Occasionally, other color morphs are available including grays, browns, purples, and pinks. They are a relatively hardy coral that offer a variety of shape and color, and are a wonderful addition to a reef aquarium. The diameter of each individual polyp can range from less than 1/8th of an inch in newly-formed colonies, up to a 1/2 inch in mature colonies that have reached sizes exceeding 6 feet. The polyp's round shape is surrounded by a raised skeleton wall giving the polyps their bump-like appearance. The morphology of Mycedium as a colony adapts quickly to any niche in which it finds itself. Its peaceful nature, combined with adaptability, allows it to grow into a number of different shapes. One of the more common forms is a flat fan shape. The sweeper tentacles and polyps are normally only extended at night. A medium to strong water flow across the surface of the coral is recommended in order to carry food to the polyps. In the home aquarium, the Green Eyed Cup Coral will do best if attached to live rock at a midpoint in the aquarium. As with all hard corals, calcium and other trace element supplements added to the water are required for optimal aquarium conditions. Supplemental target feeding of brine shrimp once a week will also foster increased growth. Approximate Purchase Size: Small: 1-1/2" to 2-1/4"; Medium: 2-1/2" to 3-1/2"; Large: 4" to 5-1/4"