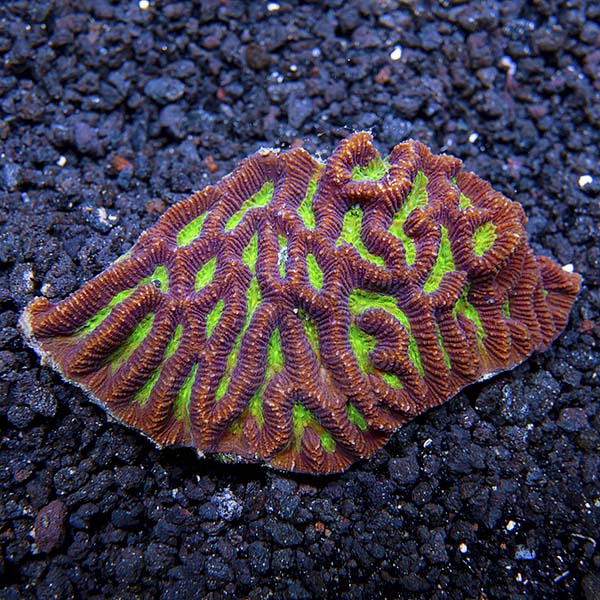 The Platygyra Brain Worm Coral is a large polyp stony (LPS) coral and is also referred to as Brain, Maze, Closed Brain, or Bowl Coral. Its genus name, Platygyra, was derived from the Greek words platys (flat) and gyros (wide circle), which describes the maze-like channels in its calcareous skeleton. The Brain Worm Coral colonies are usually massive and either dome-shaped or flattened, with various color shades of purple, green, brown, or gray and contrasting valleys which may be fluorescent under actinic lighting.

It is a semi-aggressive coral that extends sweeper tentacles at night and should be provided with adequate spacing between itself and other corals in the aquarium. The Platygyra Brain Worm Coral is relatively hardy, easy to maintain in the reef aquarium, and makes an excellent candidate for the beginner reef aquarist. It requires moderate lighting combined with moderate water movement. For continued good health, it will also require the addition of calcium, strontium, and other trace elements to the water. It produces a large amount of mucus.

It will benefit from additional food in the form of micro-plankton or brine shrimp fed in the evening while its tentacles are visible.

Write a Testimonial | Ask Customer Service
Bobby Eldredge Mashpee , MA
I purchased a medium green Platygyra and wow Liveaquaria.com sent me a really healthy good size chunk of coral. I placed it center front in my tank because it's an amazing looking coral. If you want to see a video of it I will be uploading one on YouTube tonight (8/2/17)titled Brain worm platygyra coral from Liveaquaria.com. Thank You Liveaquaria.com for hooking me up I'm very happy about this new addition to my reef tank :)
1-1 of 1 testimonials