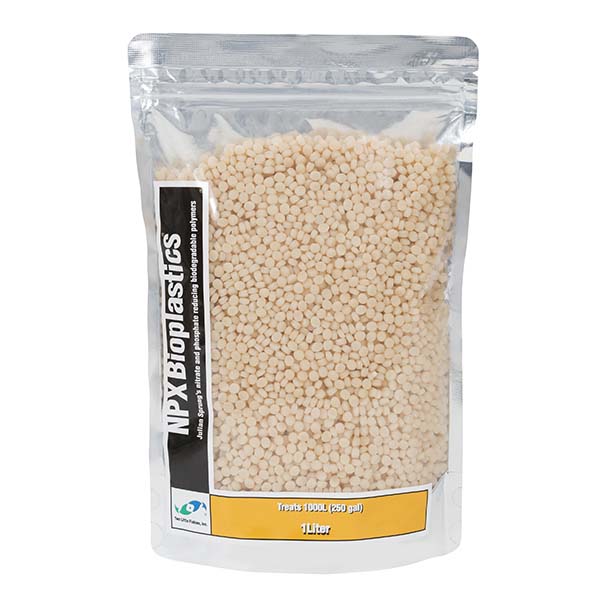 NPX Bioplastics are pelletized biodegradable polymers you use in a fluidized reactor. As bacteria populate the pellet surfaces, excess growth sloughs off to be harvested by a protein skimmer or become a natural food source for filter-feeding invertebrates such as corals, clams and sponges. Anaerobic zones within the pellets promote conditions where bacteria associated with denitrification (nitrate removal) thrive. Use this natural approach in conjunction with protein skimmers and phosphate-removing media to combat high levels of nitrate and phosphate that pollute aquarium water quality.

Use NPX Bioplastics in conjunction with proper aquarium filtration and employ strong water circulation and aeration. The use of NPX Bioplastics in marine aquariums must be accompanied by the use of a protein skimmer to achieve the export of bacteria and assimilated nutrients.

Directions for Use
NPX Bioplastics are best installed in a fluidized filter like the PhosBan Reactor 150 (#18413) or 550 (#71947). Warning: To avoid the potential for a cloudy white bacteria bloom in the water DO NOT use a full dosage to start on aquariums with high nitrate concentration. Start at 1/2 the recommended dosage and gradually increase after a few weeks to 100 ml per 25 gallons.

If a bloom develops, remove 1/2 of the NPX Bioplastics from the reactor and store it damp but not submerged in a bag. For aquaria with heavy feeding, higher quantities can be used but the accumulation of phosphate from the food may require the combined use of NPX Bioplastics and PhosBan granular ferric oxide media (#13157) in separate reactors. Observe the level of media within the filter and top off as necessary about every three to six months because NPX Bioplastics are slowly consumed.

Caution
Maintain sufficient water flow through NPX Bioplastics to prevent production of hydrogen sulfide gas. Employ strong water circulation, aeration and/or a surface skimming overflow in the aquarium to maintain high levels of oxygen saturation when using this product because of the strong influence it has on oxygen saturation. The use of NPX Bioplastics in marine aquariums must be accompanied by the use of a protein skimmer to achieve the export of bacteria and assimilated nutrients. It is not necessary for the outlet of the filter containing pellets to be positioned near the intake of the protein skimmer, but it is necessary to have a protein skimmer running on the system.

General information
NPX Bioplastics are pelletized biodegradable polymers that promote the development of bacteria that assimilate nitrate and phosphate. As bacteria develop on the pellet surfaces, excess growth sloughs off due to the tumbling in a fluidized filter and these bacteria can be removed with a protein skimmer or serve as planktonic food for filter-feeding invertebrates such as corals, clams and sponges. Anaerobic zones also develop within the pellets, thus promoting denitrification there.

NPX Bioplastics granular plastic media is made from biodegradable polymers. It is for use in a fluidized reactor. The slow release of organic food from these plastics promotes the development of bacteria that assimilate nitrate and phosphate. These bacteria can be harvested by protein skimmers, so that the nitrate and phosphate levels are naturally reduced. The bacteria are also a food source for filter-feeding invertebrates such as corals, clams, sponges, and feather dusters.

Description
The NPX Screen prevents NPX Bioplastics or other biodegradable pelletized media from passing through the dispersion plates in the PhosBan Reactor 150 or PhosBan Reactor 550.

NPX Screens are to be used instead of the Foam Sponges in the PhosBan Reactors. Remove the sponges and position the cut screens on top of the Dispersion Plates. Normally the Screens will fit snugly in place if they are cut correctly, but small plastic zip ties can also be used to secure them to the Dispersion Plate.

Guidelines
NPX Bioplastics are best employed in a fluidized reactor such as the PhosBan Reactor 150 or 550.

When using NPX Bioplastics in a PhosBan Reactor, the sponges from the reactor must be removed and replaced with NPX screens, available in a pack of 2 (#75541).