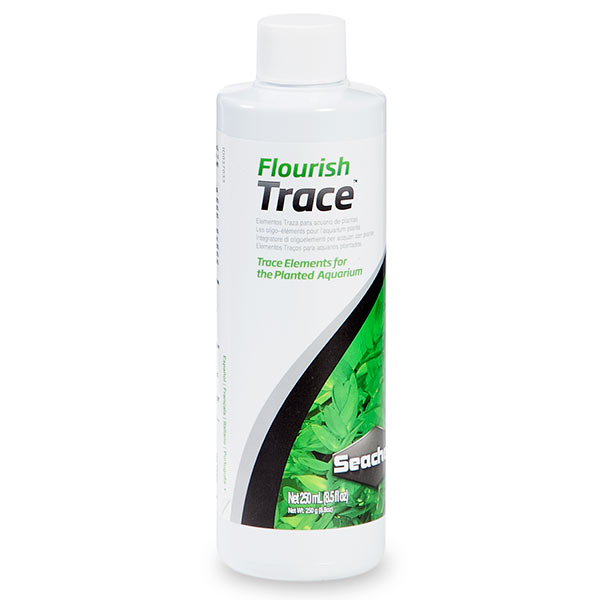 Directions
Use 5 mL for every 20 US gallons twice a week. When using in conjunction with Flourish, dose on alternate days.

General Information
Flourish Trace supplies a broad range of trace elements demonstrated to be necessary for proper plant health and growth. Trace elements are normally depleted by utilization, oxidation and precipitation. The latter two processes occur more rapidly than with other micronutrients. This makes it important to restore trace elements on a regular basis. Flourish Trace may be used alone or in conjunction with Flourish. Best results are obtained when both are used. Flourish Trace is safe for invertebrates such as shrimp.

Q: Will the recommended dosages of Flourish Trace cause an increase in general water hardness?
A: Because the elements are in trace amounts, they should not increase your general hardness. The trace elements in Flourish Trace are either utilized, oxidized or precipitated from solution.

For over three decades, Seachem has been a company rooted in sound science. Their experience in the hobby and an educated staff of chemists and biologists are part of the package when you purchase Seachem products. Seachem remains as one of the few surviving independent and privately owned pet care companies. Seachem is owned and operated by hobbyists. All Seachem employees are hobbyists who maintain aquariums at home and at the office. Seachem itself was started because one such hobbyist found the available solutions to aquarists' problems wanting. This resulted in Seachem's very first product: Cupraplex™ (today known as Cupramine™. Over thirty years later Seachem is still approaching old problems in a new way that outperform the already high standards we've set with the Seachem line. Seachem is committed to maintaining that optimization.