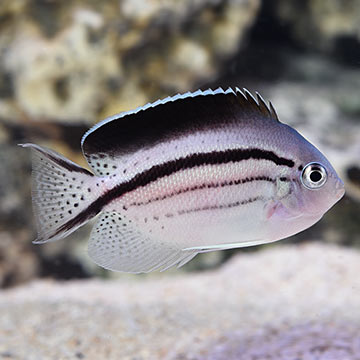 The Lamarck's Angelfish (or Lamark Angelfish) is also called the Freckletail Lyretail Angelfish. They have the distinction among angelfish of being sexually dimorphic. Both male and female are a silvery-gray with horizontal black stripes from eye to caudal fin. The female's stripes are bolder with one extending into and covering the length of the caudal fin. In both, the long dorsal fin is black, although larger in the female, and the caudal fin is freckled with black.

More easily kept than some other angelfish, the Lamarck's Angelfish requires a well-maintained tank of at least 125 gallons. They may chase small, docile planktivores such as Anthias, Fairy Wrasses, Flasher Wrasses, and Fire Gobies but will usually ignore other fish, including other Angels. Only one male Lamarck's Angelfish should be kept per tank. Fish of the genus Genicanthus are the only zooplanktivores among the angelfish.

The diet should consist of Spirulina, marine algae, high-quality angelfish preparations, and mysis or frozen shrimp.

Write a Testimonial | Ask Customer Service
David C Lake Como , NJ
Great angelfish here, it is not aggresssive at all. I even have a smaller Rusty in the tank that he gets along with well. It is a cheap angel that feeds well and is very attractive. It grows to a decent size and is different.
Julie K Scottsdale , AZ
Well mine just got here and it looked like the photo and bigger then I thought is was healthy and trying to get out of the bag as soon as I took it out of the box.. It's water was warm but I got it to the right temp and placed it in my show tank right after.. It made it self at home and much to my surprise it was not like most that hide for a while it was like it was always there picking its spot right away .. Thanks again love getting my fish from you always healthy...
Zach B Chicago , IL
I have a pair of Lamarck's in my home aquarium. They have done very well together and are not picky eaters. They are very active and recognize their owners.
Aaron M Sanford , NC
Received my female today. Great packaging and shipping from CA to NC. I must say she is a beauty and much larger than expected. Great job LA.
1-4 of 4 testimonials