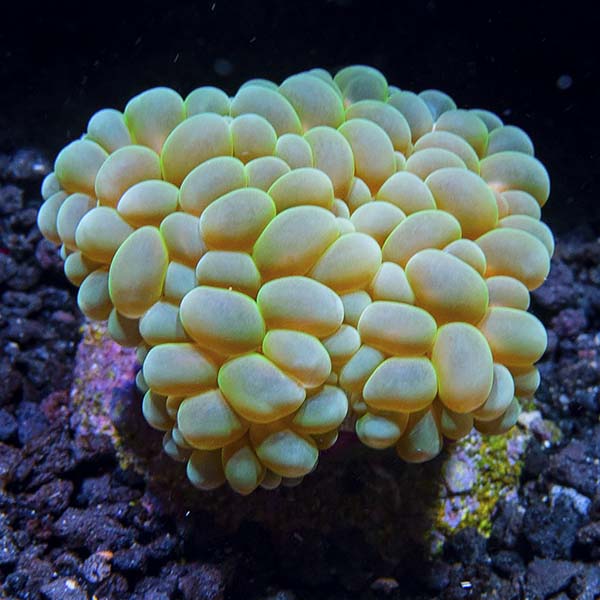 Elegant and distinct in appearance, the Aquacultured Micronesian Bubble Coral makes a welcomed addition even for entry-level coral enthusiasts. The Aquacultured Micronesian Bubble Coral is desirable not only for its unique namesake bubble-like appearance but for its tolerance and ability to thrive under a variety of conditions in the home reef aquarium.

The Aquacultured Micronesian Bubble Coral requires a moderate level of lighting combined with low to medium water movement in the home reef aquarium. Too much water flow may impede the coral from fully expanding. Keep in mind the fleshy polyps of Bubble Corals are very fragile and will puncture easily. Be careful when handling these corals and to only handle them by the hard skeleton. Because they can extend long sweeper tentacles, be sure to provide ample space between neighboring corals to prevent potential harm. For continued good health, it will also need the addition of calcium, strontium, and other trace elements to the water.

The Aquacultured Micronesian Bubble Coral will benefit from additional food fed weekly in the form of brine shrimp or micro-plankton.

The Aquacultured Micronesian Bubble Coral is attached to an Aragonite Block and can be easily placed in holes or between the rockwork of the reef aquarium.

Write a Testimonial | Ask Customer Service
Chris Sansom Destin , FL
This is the best coral I have ever purchased online. It arrived in great shape and after about 6 months it has doubled in size. I have owned 2 of these before with varied results. This one...rock solid.
1-1 of 1 testimonials