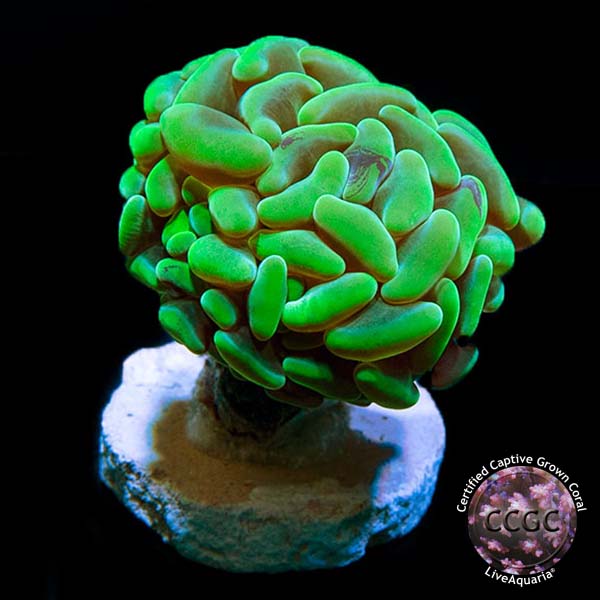 The LiveAquaria® CCGC Aquacultured Hammer Coral is a large polyp stony (LPS) coral and often referred to as Euphyllia Hammer Coral or Anchor Coral. Its common names are derived from the appearance of its hammer -like, anchor-shaped tentacles. Its polyps are visible throughout the day and night and hide its skeletal base. It may be gold, green, tan, or brown in color, with lime green, yellow or pink tips on the ends of its tentacles that glow under actinic lighting. Some varieties may be branched which makes them look similar to a Torch Coral (E. glabrescens).

It is moderately difficult to maintain, but with proper water conditions in the aquarium, it will thrive. It will require moderate lighting combined with moderate water movement within the aquarium. At night, its sweeper tentacles can extend up to six inches in the reef aquarium, allow plenty of room between it and other neighboring corals. For continued good health, it will also require the addition of calcium, magnesium, strontium, Iodine and other trace elements to the water. The LiveAquaria Hammer Coral will benefit from additional food fed weekly in the form of micro-plankton or brine shrimp.

Write a Testimonial | Ask Customer Service
Thiago O Everett , MA
I bought (this) hammer as my first ever Coral last week, delivery was on time but when it arrived I was incredibly discouraged because it was all closed up and sort of pale-brown looking. I thought it was dead, with my lack of experience i pretty much had no hope. I still dipped it which made it look slightly worse! I left it in the tank with GOOD water quality, not great, but good, and went to work. Fast forward about 9-10 hours later I come home expecting a closed dead coral on a frag but instead I went home to a beautiful fully opened and extended hammer coral, so I stared at it for about 15 minutes and felt fantastic about getting into this hobby in the first place. Thanks LiveAquaria!
1-1 of 1 testimonials