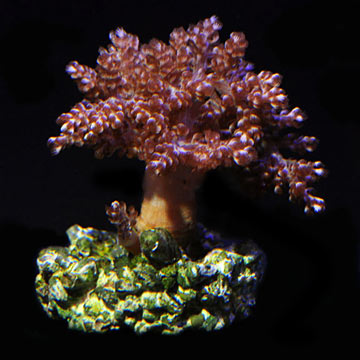 The aquacultured Kenya Tree Coral, also referred to as a Cauliflower Soft Coral. It has a thick trunk, like a tree, and many branches giving it an arboreal appearance.

It is a semi-aggressive soft coral and needs space between itself and other corals. This hardy fast growing Aquacultured coral is much easier to maintain in the home aquarium, and adapts easily to a variety of lighting conditions. Ideally maintain this coral in medium to strong water movement, along with the addition of iodine, strontium, and trace elements to the water.

They will thrive in a variety of lighting conditions, ranging from power compacts, T-5s, powerful LEDs and up to the more intense metal halides. The aquacultured corals satisfy the majority of their nutritional requirements by means of photosynthetic, symbiotic zooxanthellae algae hosted within its body.

It obtains the majority of its nutrition from symbiotic algae zooxanthellae, but will benefit from the addition of foods designed for corals and invertebrates.

The Aquacultured Kenya Tree Coral coral is attached to an argonite plug and can be easily placed in holes or between the rockwork of the reef aquarium.

Write a Testimonial | Ask Customer Service
Eric M Valparaiso , IN
This was my first " coral" it is doing well. Not really demanding and just gets taller and wider by the day! Good choice for beginners and pros alike! !
1-1 of 1 testimonials