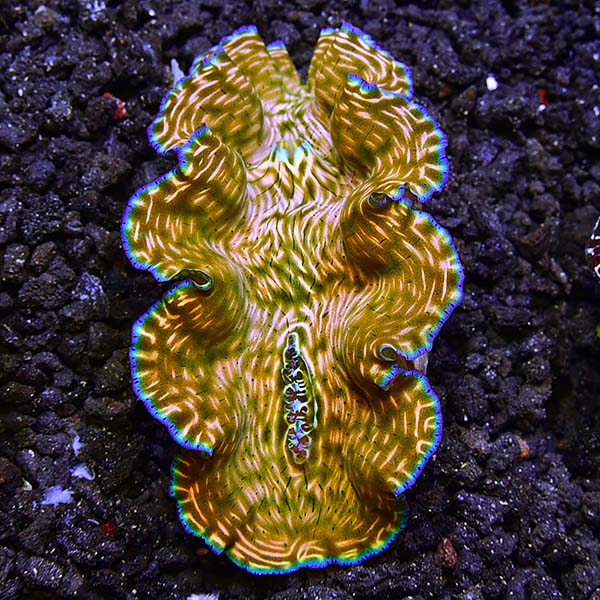 The aquacultured Tridacna derasa Clam is also referred to as the Southern Giant Clam or Smooth Giant Clam, and is the second largest of all the Tridacna spp., reaching a size of 24" in the wild. Unlike most other Tridacna spp. that have a large byssal opening, Derasa Clams have a narrow gap on the underside of their thick, smooth shell. They can easily be confused with their close relative Tridacna gigas, especially when they are very small in size. T. derasa can be identified by having six to seven vertical folds in their shell which they can close completely, where T. gigas has only four or five vertical folds, and is unable to completely close their hinged shell.

The smaller Derasa Clams are much more sensitive to moderate lighting as their membrane is much thinner than larger specimens. For this reason, care should be taken to properly photo-adapt them to the existing reef aquarium lighting in a similar manner to newly introduced stony and soft corals. When adapting a new Derasa Clam to moderate lighting, it is ideal to set them on a small rock or in a plastic dish with coarse substrate at the bottom of the aquarium. Over time, the clam can then be slowly moved up higher in the aquarium.

The Derasa Clam relies heavily on the photosynthesis of the zooxanthellae cells growing in its mantle. However, all clams also require micro foods designed for filter feeders, especially when small. Offer phytoplankton and other micro-foods.

Looking for the best food to feed your Clams?