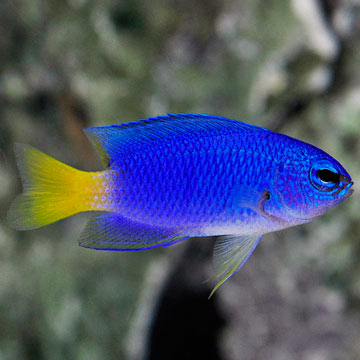 Similar in appearance to the aquarium favorite Yellowtail Damselfish, Pomacentrus similis is an electric blue jewel of the aquarium boasting a sunny yellow tail. This color combination looks stunning against any backdrop of corals and live rock. But what pleases aquarists most is that the Similar Damsel is less aggressive and does not need as large of an aquarium as other Damsels.

Native to the reefs of the Maldives, this member of the Pomacentridae family prefers multiple hiding places and peaceful tankmates. Though most Similar Damselfish will ignore other fish, invertebrates, or corals, some may be territorial towards its own kind or similar-sized fish. The Similar Damsel is best kept in small groups of odd numbered fish in suitably sized systems.

The Similar Damsel requires a 30-gallon or larger aquarium with numerous hiding places. It can be confrontational towards its tank mates.

The diet should consist of a variety of meaty items, herbivore preparations, and flaked foods.