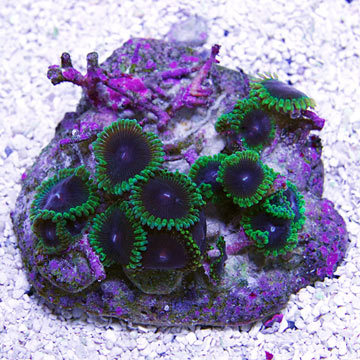 Why so serious when spectacular maricultured Zoanthid color morphs are available? The Joker Colony Polyp is no laughing matter when it comes to intense coloration. The deep, Indigo blue coloration of each plate is contrasted with Kelly green tentacles for a moody color combo that packs a visual punch. The repeating, colonial nature of the Joker Colony Polyp enhances this effect to animate any reef aquarium with wildly unexpected color and pattern.