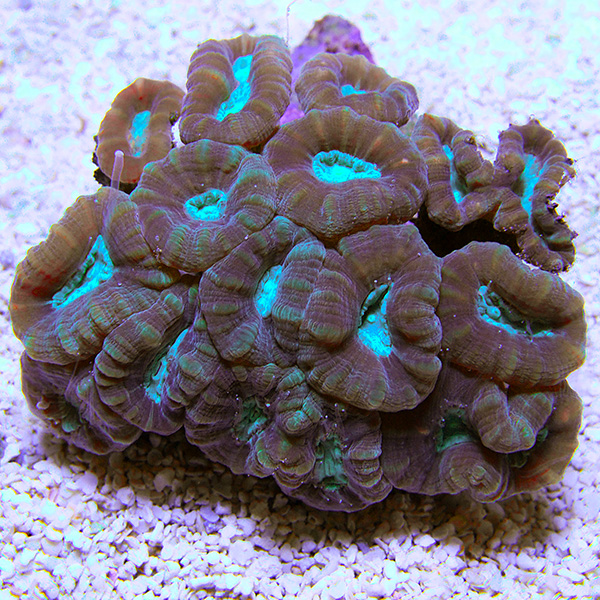 The Green Big Pipe Trumpet Coral is a beauty sure to put fellow reefers to the test. At first glance, the wonderfully-colored Green Big Pipe Trumpet Coral can be easily mistaken for the more commonly available Candy Cane Coral (Caulastrea furcata). However, upon closer inspection, the avid reef hobbyist will realize this exceptionally colored coral is indeed Caulastrea echinulata. Both coral collectors and enthusiasts will be delighted adding this uncommon color variety to their aquarium as a centerpiece or as an engaging conversation piece.

The Green Big Pipe Trumpet Coral is hardy and a relatively peaceful reef inhabitant with very short sweeper tentacles. Its genus name, Caulastrea, comes from the Latin kaulos (stalk), and aster (star) describing its skeletal structure consisting of tubular stalks with stars on each tip. Under actinic light, its colorful polyps will stand out from most other corals.

Keep in mind that this and other species of Caulastrea can be sensitive to metal halide lighting, so take time acclimating the Green Big Pipe Trumpet Coral under metal halide aquarium lighting. Simply place the coral low in the aquarium for a few weeks until it opens fully and then slowly move the colony to the desired location.

For continued good health, the Green Big Pipe Trumpet Coral will also require the addition of calcium, strontium, and other trace elements to the water. It will benefit from additional food fed weekly in the form of chopped meaty items, baby brine shrimp or zooplankton.