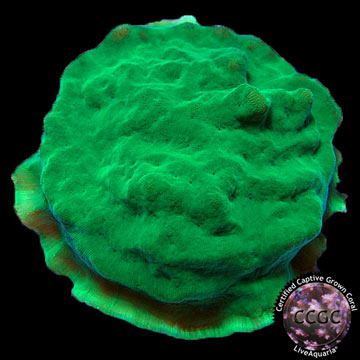 The Forest Green Psammocora is a truly extraordinary specimen. Its uncommon beauty is heightened only by its infrequent appearance in the aquarium trade. Though common in nature, members of the Genus Psammocora have led a quiet life, drawing little attention among reef keepers. That is, until Coral Farm & Aquatic Life Facility propagated this hidden gem to share with the reef community. Coral aficionados will marvel at the addition of this unique specimen.

The Forest Green Psammocora and members of the Family Siderastreidae are easily recognized by star- or flower-like corallites created as the septa fuse at the center. Even distribution of countless corallites gives the Forest Green Psammocora a highly-textured appearance that enhances the vibrant green coloration. Though typically encrusting in habit, species of Psammocora display a wide variety of architectural growth forms that add to the desirability of these corals.

Keep in mind that this and other species of Psammocora can be sensitive to metal halide lighting, so take time acclimating the Forest Green Psammocora under metal halide aquarium lighting. Simply place the coral low in the aquarium for a few weeks until it opens fully and then slowly move the colony to the desired location. Make sure to place the Forest Green Psammocora away from more aggressive corals as it has poor defenses.

For continued good health, the Forest Green Psammocora will also require the addition of calcium, strontium, and other trace elements to the water. It will benefit from additional food fed weekly in the form of chopped meaty items, baby brine shrimp or zooplankton.