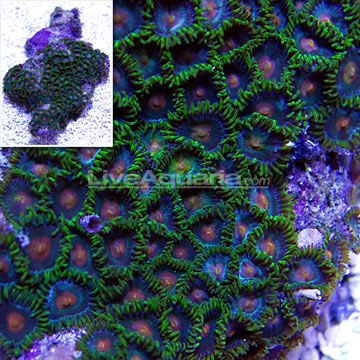 Celebrate the green and gold in your home aquarium! Just like its namesake, this winning Zoanthus Colony Polyp is a crowd-roaring touchdown in your showcase reef display. The center coloration of bright yellow is ringed with a contrasting blue surrounded by rich green tentacles. The colonial nature of the polyp corals creates an impressive flush of color that is visually stimulating yet pleasantly harmonious. Over time, an established colony of Green Bay Packer Zoanthus Colony Polyp will create an impressive living carpet of color reminiscent of a field of underwater wildflowers.