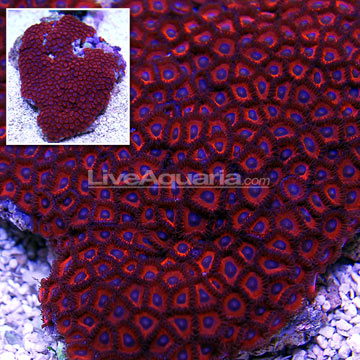 The much sought-after KeddRedd Zoanthus Colony Polyp buzzes with vivid reds and blues, seeming to ripple and pulse beneath glimmering light. The center coloration of deep indigo is ringed with a contrasting pinkish red surrounded by maroon-purple tentacles. The colonial nature of the polyp corals creates an impressive flush of color that is visually stimulating yet pleasantly harmonious. Over time, an established colony of KeddRedd Zoanthus Colony Polyp will create an impressive living carpet of color reminiscent of a field of underwater wildflowers.

The Zoanthus Colony Polyp Corals are also referred to as Sea Mats, or Button Polyps. Their most common color is green, but they are also found in other bright colors. They are colonial animals with multiple individual polyps attached to a piece of live rock.