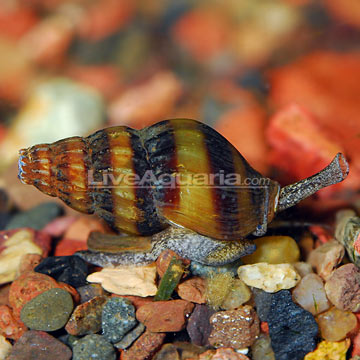 In the wild, you'll find the Assassin Snail living in clean, fast-flowing streams with sandy or muddy substrates, though they are also tolerant of a wide range of water conditions, including ponds and ditches, making them a hardy addition to the home aquarium. Opportunistic carnivores, the Assassin Snail feeds on both live prey and scavenged detritus. They stay partially hidden under the sediment, and if a snail its size or smaller slides past, they will give chase and devour it. Otherwise, Clea helena is a peaceful community tank resident. Fish are at no risk at all once mobile, and livebearer fry are ignored.

To address an existing population explosion of Malayan live-bearing snails or alike, consider stocking quite a few Assassin Snails, ideally 5 snails for every 15 gallons in your system.

Write a Testimonial | Ask Customer Service
Pat R Fort Myers , FL
Unwanted snails are a fact of life in a planted aquarium. My tank was overwhelmed by them and manually removing them was futile. Not wanting to use a chemical fix, I started with one Assassin snail and was amazed at it's voracious appetite. Think Pac-Man goobling ghosts! I have added more Assassins and the snail problem is now a thing of the past. I highly recommend this natural method of snail control.
Bruce M Lawton , OK
My tank was overrun with small, conical snails, literally thousands of them. Nothing I did to control them without dangerous chemicals worked. Then, there was the Assassin Snail. Inside of two months the nuisance snails were gone. After a year, I only see an occasional Assassin Snail.
Monica N Pomana , CA
This little guy moves fast for a snail! It's so fun to watch it move around the tank. It's beautiful too. Of course, clearing up the unwanted pond snails for my tank is a huge plus as well! Love it!!
Lauren B Athens , GA
AMAZING!!!! I love my assassin snail. I started off with 20+ cone snails/other unwanted snails and now I am down to 5. Heh, this guy works. I recommend 100%!
1-4 of 4 testimonials