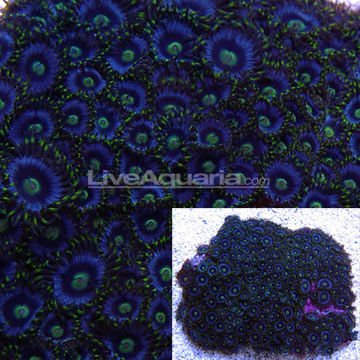 The Purple Dragon Colony Polyp transforms your aquarium into a mesmerizing kaleidoscope of magical colors. Both serious Zoanthid collector and budding reef aquarium enthusiast will find the hypnotically stunning Purple Dragon Colony Polyp irresistible. The center green coloration of this "Zoa dragon" is touched with a beautiful tropical purple to form an exotic "pupil." A deep indigo blue ring forms an "iris" that contrasts boldly against the smoldering brick red coloration of the tentacles.