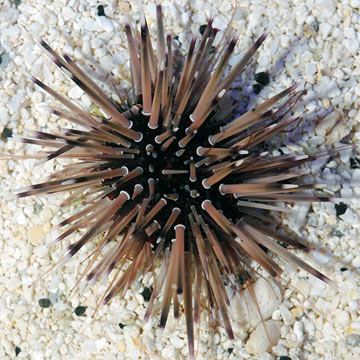 The Shortspine Urchin, or Rock Burrowing Urchin, has an oval to round black body covered with hundreds of uniform, reddish-orange spines. Typically found in the back reef, this night-dwelling algae cleaner is known to burrow small niches in carbonatic rocks (dead corals) to hide.

The Shortspine Urchin requires ample hiding places and sufficient room in which to forage in the home aquarium. It generally hides in caves during the day, though it may make a burrow in thick substrates. At night, it comes out to graze on algae, moving about by its suctorial podia that are aligned in five doubled rows.

The aquarium should include large amounts of live rock on which it can graze. Rock formations need to be stable and able to withstand the burrowing movement of the Urchin wedging itself in crevices.

Shortspine Urchins are generally solitary, but will tolerate others of its own kind. It is sensitive to high levels of copper-based medications and will not tolerate high nitrates. Poor water quality will cause it to lose its spines.