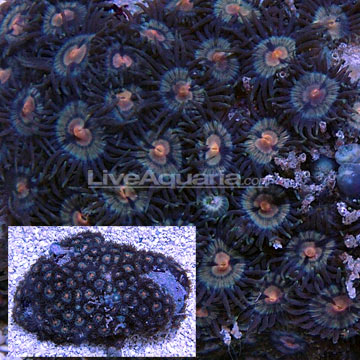 The Starfire Zoanthus Colony Polyp shines like the Milky Way on a warm clear night. The center coloration of soft peach is ringed with a contrasting deep purple surrounded by mossy-blue tentacles. The colonial nature of the polyp corals creates an impressive flush of color that is visually stimulating yet pleasantly harmonious. Over time, an established colony of Starfire Zoanthus Colony Polyp will create an impressive living carpet of color reminiscent of a field of underwater sky filled with distant galaxies.