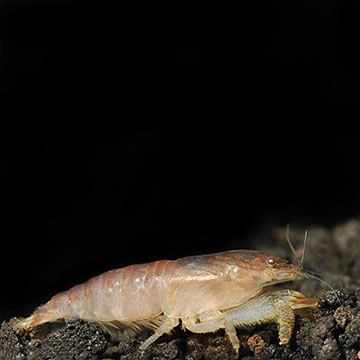 Atya gabonensi, commonly known as the Vampire Shrimp, Giant African Filter Shrimp, or Gabon Shrimp, is a uniquely popular freshwater shrimp for the home aquarium. Their fascinating behavior, intense coloration, long life expectancy (up to 5 years under the right conditions!) and relative scarcity in the hobby make them a true showcase species.

Viper Shrimp have a deeply furrowed, wrinkly carapace. Coloration varies from blue, gray, white after molting, and increasingly blacker as they age. Despite their somewhat "demonic" appearance, they are absolutely peaceful and harmless fan shrimp. Their front "claws" are actually long soft bristles which they fan open to filter feed, perched head-on into the current with fans outstretched.

In the wild, Atya gabonensi typically live in small, fast-flowing to rapid mountainous streams, gripping stony bedrock directly in the current with their powerful back claws and legs. They use their fan-like front appendages to filter very fine floating food items (such as mosquito larvae, daphnia and Cyclops, as well as small algae particles) from the current. During daylight they typically seek shelter under rocks and logs. They come out of hiding at twilight or in darkness in order to feed.

House in a community aquarium with small peaceful fish and sufficient water flow. Since they prefer oxygen rich water and strong current, use a submersible pump to keep water in constant circulation. Feed sparingly using very fine floating food like algae powder or dried small crustaceans shortly before turning the lights off.