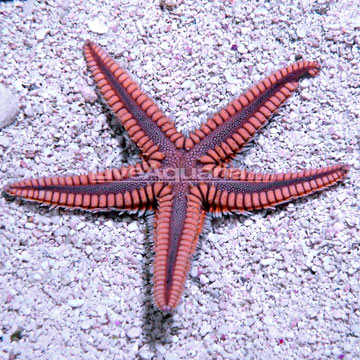 Though beautifully colored, the Blue and Pink Sea Star is also a useful addition to any established home aquarium. Obviously, this Astropecten species' most noticeable trait is the bright pink and blues of each arm. But in addition to its exotic colors, this sand sifting starfish is also highly active and mobile. It can sift and aerate large amounts of sand as it burrows into and searches through the substrate for food.

These peaceful omnivores are a great addition to reef aquariums. They will consume detritus and left over food. Like other starfish, this member of the Astropectinidae family also consumes small invertebrates, including shrimp, urchins, mollusks, bivalves, or other small sea stars. As such, they should be actively fed with a varied diet that mimics their natural food sources, especially in well-established marine aquariums. Otherwise, these voracious feeders can quickly clean your aquarium of detritus and then bury themselves into your substrate, starve, and eventually begin to decay.

To foster its feeding habits, the Blue and Pink Sea Star should be kept in aquariums with large, deep sand bottoms of several inches in depth. Since they are also slower moving than most fish, they should not be housed with natural predators, including Puffers.

Like other invertebrates, the Blue and Pink Sea Star is very intolerant of sudden changes in oxygen levels, salinity, and pH and cannot tolerate copper-based medications. To successfully acclimate new specimens to your aquarium, use the drip acclimation method over an extended period of time. Additionally, they should never be exposed to air while handling.

Breeding in the home aquarium is extremely difficult with no distinguishing characteristics to help differentiate between males and females.