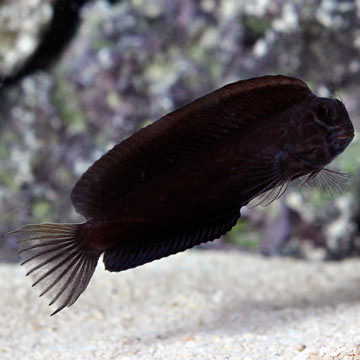 The Black Combtooth Blenny - also known as Namive's Blenny, Tribal Blenny or Yellowtail Black Blenny - isn't often seen in the hobby. Adding one to your reef aquarium may just cause a little blenny envy among friends!

Useful for controlling microalgae on live rock and corals, these reef-safe herbivores pack plenty of personality, darting from perch to perch among the rockwork. Body coloration graduates from a primarily blackish-purple body to an electric indigo and yellow-white tail.

In nature, they are most commonly found among the shallow reef flats, but also inhabit estuaries and outer reef lagoons to about 60 feet deep. Combtooth Blennies are named for their distinctive fine teeth - about 100! - embedded in their lips rather than their jaw. They use these teeth to scrape algae off rocks and aquarium glass.

Generally found amid crevices and rocks on the bottom of its environment, the Black Combtooth Blenny needs a tank of at least 30 gallons with plenty of scattered live rock for perching and hiding. They are generally peaceful, but may become territorial towards others within the same genus.

The diet of the Black Combtooth Blenny should include vegetable matter, including frozen and dried foods containing marine and blue-green algae. It will also feed on (and help control) algae growing in the aquarium.

Write a Testimonial | Ask Customer Service
Josh K La Crosse , WI
What a cool fish! Lurkey the Combtooth Blenny used to spend most of his time hiding in the dark until I found an old barnacle. He now spends most of his time swimming between different barnacle holes and popping his head out to survey the tank. Gets along well with the other fish. Although, Lurkey has gotten an immense dislike for my hand when it is in the tank, darting out and nipping at me and then darting back to his barnacle.
Chris K PA
This is a great little fish, he is very adorable! He does great in my 55 gallon tank with my,Longnose Hawkfish, Maroon Clown, Niger triggerfish, and my Lunare Wrasse. A great beginners choice!
Valarie L Gastonia , NC
We loved our Combtooth Blenny. Known in our tank as "snoop dawg". Unfortunately, I found him wrapped up in our anemone this morning. He was still breathing when I got him away from the anemone, but died shortly after :( Ready to add one back to our tank!!!
D Harris Indian Trail , NC
This is a very curious and active Blenny. He swims around allot and changes his coloration at times. He can appear solid black then have beautiful blue bands in his face and blue spots on his body. His tail ranges from black to white and sometimes yellow. If you want an interesting fish this one is a must .
Jeffy C Burnsville , MN
Picked up one of these guys from the diver's den and so far he's doing very well after 2 weeks in quarantine. He's perched on rocks about 50% of the time and under the rock the other 50%. He's an aggressive (but not greedy) eater and he took very well to algae pellets as well as mysis shrimp, brine shrimp and blood worms. I'm praying that he doesn't develop a taste for corals because he's pretty cool. He's about 4 inches long, so I think he's a full on adult. There are two clowns in the quarantine tank with him and he doesn't seem to have ANY aggression towards them even if they're on top of him. The picture doesn't do a very good job of showing how vibrant the BLUE "warpaint" that goes from his jaw and gills to halfway down his body. When he's on top of the rocks with the light shining on him, the blue coloring he has would make Walt and Jesse jealous. Plus, when he does swim around, he puffs up his dorsal fin and looks like a miniature jet-black marlin. At this point, I would recommend adding one of these fishies to your setup. Happy reefing!
Adrian J Heber Springs , AR
A WONDERFUL ADDITION!!! Benny, the blenny, is a great fish. It is so much fun to watch his facial expressions as he perches on rocks and fake coral branches throughout our FOWLR tank. We have a 55 gallon. He is very hardy and fun to watch. He does not stress out easily and gets along with our other fish. Highly Recommended!!!!!!!
1-6 of 6 testimonials