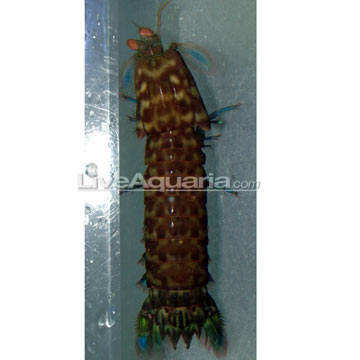 The Lime Green Mantis Shrimp is included in the Smashing Mantis Shrimp group. It is a very interesting shrimp that resembles the praying mantis insect. It has large colorful eyes that are either blue or green rimmed and its body exhibits many bright colors. The main part of the body is brown with green highlights on the shell. Some species may have a distinct white strip that runs down the back of the shrimp.

Lime Green Mantis Shrimp are extremely aggressive shrimp that should be housed alone in a species aquarium. They have very quick claws that they use to break the shell of crustaceans and crabs. They should not be housed with fish or other invertebrates, unless they are very large, and caution should still be exercised. A sandy bottom with plenty of rubble and at least one piece of live rock should be provided for these shrimp to create a cave.

The diet of the Lime Green Mantis Shrimp should include live feeder fish, crabs and frozen meaty foods such as fish, scallop and shrimp.

Write a Testimonial | Ask Customer Service
Joe C. Salt Lake City , UT
I could not be more happy with the Mantis Shrimp that I received from Live Aquaria. Within minutes of adding it to it's specimin tank, it was out hunting for food and made a nice meal out of some snails. The Mantis that I received is beautifully colored as well, and has been very active and interactive. A must have for those who are looking for something out of the norm.
1-1 of 1 testimonials